Omicron is the new COVID kid on the block: five steps to avoid, ten to take immediately

What not to do: ban travel. Scenes at South Africa’s OR Tambo International airport after the first flight bans were announced. Phill Magakoe / AFP via Getty Images

South Africa reacted with outrage to travel bans, first triggered by the UK, imposed on it in the wake of the news that its genomics surveillance team had detected a new variant of the SARS-CoV-2 virus. The Network for Genomics Surveillance in South Africa has been monitoring changes in SARS-CoV-2 since the pandemic first broke out.

The new variant – identified as B.1.1.529 has been declared a variant of concern by the World Health Organisation and assigned the name Omicron.

The mutations identified in Omicron provide theoretical concerns that the variant could be slightly more transmissible than the Delta variant and have reduced sensitivity to antibody activity induced by past infection or vaccines compared to how well the antibody neutralises ancestry virus.

As vaccines differ in the magnitude of neutralising antibody induced, the extent to which vaccines are compromised in preventing infections due to Omicron will likely differ, as was the case for the Beta variant.

However, as vaccines also induce a T-cell response against a diverse set of epitopes, which appears to be important for prevention of severe COVID, it is likely that they would still provide comparable protection against severe Covid due to Omicron compared with other variants.

The same was observed for the AstraZeneca vaccine. Despite not protecting against the mild-moderate Beta Covid in South Africa, it still showed high levels of protection (80% effective) against hospitalisation due to the Beta and Gamma variants in Canada.

In view of the new variant, there are a few steps that governments shouldn’t be taking. And some they should be taking.

What not to do

Firstly, don’t indiscriminately impose further restrictions, except on indoor gatherings. It was unsuccessful in reducing infections over the past 3 waves in South Africa, considering 60%-80% people were infected by the virus based on sero-surveys and modelling data. At best, the economically damaging restrictions only spread out the period of time over which the infections took place by about 2-3 weeks.

This is unsurprising in the South African context, where ability to adhere to the high levels of restrictions are impractical for the majority of the population and adherence is generally poor.

Secondly, don’t have domestic (or international) travel bans. The virus will disseminate irrespective of this – as has been the case in the past. It’s naive to believe that imposing travel bans on a handful of countries will stop the import of a variant. This virus will disperse across the globe unless you are an island nation that shuts off the rest of the world.

The absence of reporting of the variants from countries that have limited sequencing capacity does not infer absence of the variant. Furthermore, unless travel bans are imposed on all other nations that still allow travel with the “red-listed” countries, the variant will directly or indirectly still end up in countries imposing selective travel bans, albeit perhaps delaying it slightly.

In addition, by the time the ban has been imposed, the variant will likely have already been spread. This is already evident from cases of Omicron being reported from Belgium in a person with no links to contact with someone from Southern Africa, as well as cases in Israel, UK and Germany.

All travel bans accomplish in countries with selective red-listed countries is delay the inevitable. More could possibly be accomplished by rigorous exit and entry screening programmes to identify potential cases and mandating vaccination.

Third, don’t announce regulations that are not implementable or enforceable in the local context. And don’t pretend that people adhere to them. This includes banning alcohol sales, whilst being unable to effectively police the black market.

Read more: Australians will soon receive COVID booster vaccines. Why do we need them, and how effective are they?

Fourth, don’t delay and create hurdles to boosting high risk individuals. The government should be targeting adults older than 65 with an additional dose of the Pfizer vaccine after they’ve had two shots. The same thing goes for other risk groups such as people with kidney transplants, or people with cancer and on chemotherapy, people with any other sort of underlying immuno-suppressive condition.

South Africa shouldn’t be ignoring World Health Organisation’s guidance which recommends booster doses of high risk groups. It should de-prioritise, for the time being, vaccinating young children with a single dose.

Fifth, stop selling the herd immunity concept. It’s not going to materialise and paradoxically undermines vaccine confidence. The first generation vaccines are highly effective in protecting against severe COVID-19, but less predictable in protecting against infection and mild COVID due to waning of antibody and ongoing mutations of the virus. Vaccination still reduces transmission modestly, which remains of great value, but is unlikely to lead to “herd-immunity” in our lifetimes.

Instead we should be talking about how to adapt and learn to live with the virus.

There is also a list of things that should be considered in the wake of the Omicron variant, irrespective of whether it displaces the Delta variant (which remains unknown).

Firstly, ensure health care facilities are prepared, not only on paper – but actually resourced with staff, personal protective equipment and oxygen, etc.

There are 2000 interns and community service doctors in South Africa waiting for their 2022 placement confirmation. We cannot once again be found wanting with under-prepared health facilities.

Provide booster doses of J&J or Pfizer to all adults who received a single dose J&J. It’s needed to increase protection against severe COVID. A single dose of the J&J vaccine reduced hospitalisation due to Delta variant in South Africa by 62% in South African healthcare workers, whereas two doses of AZ and mRNA vaccines in general had greater than 80%-90% protection against severe disease from the Delta variant.

Studies confirm a two dose schedule of the Johnson & Johnson vaccine is superior in protecting against hospitalisation than a single dose. And if you want durability of protection, you need to boost, which can be done with another dose of Johnson & Johnson or a dose of mRNA vaccine.

The evidence is clear that the type of immune responses from a heterologous approach of AZ or JJ followed by a mRNA vaccines such as Pfizer/Biontech induces superior neutralising and cell mediated immune responses than two doses of the non-replicating vector vaccines.

Thirdly, implement vaccine passports for entry into any indoor space where others gather, including places of worship and public transport. Vaccination might be a choice currently, however, choices come with consequences. Even if vaccines only reduce transmission modestly, over and above the infections they prevent, a breakthrough case in a vaccinated individual poses less risk of transmission to others than infection in an unvaccinated and previously uninfected individual.

Fourth, continue efforts at reaching out to the unvaccinated and under-immunized. This should include the use of pop up facilities where people are likely to gather and other targeted community outreach programs.

Fifth, immediately boost high risk groups older than 65 and others who have immunosuppressive conditions. The primary goal of vaccination therefore needs to be on reducing severe disease and death. This requires targeted strategies on who to prioritise.

Sixth, encourage responsible behaviour to avoid re-imposing alcohol and other restrictions to punish all due to irresponsibility on part of a minority.

Seventh, monitor bed availability at regional level to help decide on regional action to avoid overwhelming of facilities. Higher levels of restrictions need to be tailored for when we expect overwhelming of health facilities. As hospitalisation usually lag behind community infection rates by 2-3 weeks, keeping an eye on case rates and hospitalization rates could predict which facilities in which regions may come under threat.

This would allow for a more focused approach to imposing restrictions to relieve anticipated pressure on health facilities 2-3 weeks before expected. This will not change the total number of hospitalisations. But it will spread it out over a longer period of time and make it more manageable.

Eighth, learn to live with the virus, and take a holistic view on the direct and indirect effects of the pandemic on livelihoods. The detrimental indirect economic, societal, educational, mental health and other health effects of a sledge-hammer approach to dealing with the ongoing pandemic threatens to outstrip the direct effect of COVID in South Africa.

Ninth, follow the science and don’t distort it for political expediency.

Tenth, learn from mistakes of the past, and be bold in the next steps. 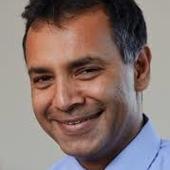 Shabir A. Madhi institution receives funding from SAMRC, BMGF, Novavax, Pfizer and JJ for research undertaken in by the institution. Also, receives advisory fees from BMGF.