Fiction and non-fiction works about disability and Deafness are often hampered by stereotypical representations. A disability is frequently presented as something to “overcome”, or used to characterise someone (ever notice all those evil characters portrayed as disfigured?).

These representations obscure the joys, frustrations and creativity of living with disability and Deafness.

Dutch author Corinne Duyvis started the #OwnVoices movement on Twitter because she was frustrated that calls for diversity within the publishing industry did not extend to diverse authors. Originating in discussions of young adult fiction, #OwnVoices aims to highlight books written by authors who share a marginalised identity with the protagonist.

Australia has an established literary tradition of writing about disability. Here are five books by Australian disabled writers that reveal insights into their lives and conditions.

Many readers will be familiar with Marshall’s I Can Jump Puddles (1955), the first book in his series about growing up and living with polio in rural Australia.

Where that book is a cheerful and somewhat sanitised account of living with a disability, Hammers Over the Anvil (1975), the fourth and final book in Marshall’s series, is more realistic.

Marshall’s publisher refused to publish the book, thinking it would tarnish his image. Despite — or perhaps because of — his brutal treatment, Marshall shows a keen sympathy for disenfranchised people and also for animals.

2. Donna Williams’ Nobody Nowhere: The Extraordinary Autobiography of an Autistic Girl (1991)

Donna Williams was not diagnosed with autism until she was an adult; prior to that she was thought to be deaf and psychotic.

Her story begins at age three and is thick with sensory details, which both delight and overwhelm Williams. She recounts interactions with hostile people — including her own mother, who wanted to admit Williams to an institution.

This book was the first full-length, published account by a person with autism in Australia. It became an international bestseller, spending 15 weeks on the New York Times bestseller list, and was translated into 20 languages.

In this book, Gayle Kennedy, of the Wongaibon people of south west New South Wales, uses a series of engaging vignettes to describe her life as a First Nations woman who had polio.

Kennedy was sent away for treatment. When she returned, her parents seemed like strangers; it took a while to readjust. Though the subject matter sounds heavy, this humorous and accessible work is rich with stories about the importance of family (including dogs!) and the impact of racism.

It is also an important book because it chronicles some of the experiences of First Nations people with disability. It won the David Unaipon award in 2006.

Poet Andy Jackson, who has a condition called Marfan Syndrome that affects the body’s connective tissue, began performing poetry to give himself more control over representations of his body.

His collection consists of biographical poems of people with Marfan Syndrome, some of whom he interviewed, and historical figures who are thought to have had the condition, including Abraham Lincoln, the ancient Egyptian pharaoh Akhenaten, Mary Queen of Scots, composer Sergei Rachmaninoff and blues guitarist Robert Johnson.

Poetry, with its focus on voice, is strongly connected to the way that bodies express themselves, often in unique ways. As Jackson writes at the end of his poem Jess:

now look at this photo and tell me

The final book on my list is one I haven’t read yet – but I cannot wait until I can. Edited by Carly Findley, who has ichthyosis, this collection to be released early next year, will highlight the range of childhoods experienced by people with disability in Australia.

We will be able to read about how young people manage ableism and the (sometimes) soreness of not fitting in, and interviews with prominent Australians such as Senator Jordon Steele-John and Paralympian Isis Holt.

I lost most of my hearing when I was four, and when I was growing up I didn’t read a single book that featured a character who was Deaf. Books like Growing Up Disabled will help young Deaf and disabled people recognise themselves in Australian literature.

In my own hybrid memoir, Hearing Maud, I weave together my experiences of Deafness with those of Maud Praed, the Deaf daughter of 19th century expatriate Australian novelist Rosa Praed.

Maud and I were born 100 years apart, and although our lives went in radically different directions many of our circumstances are the same — especially the expectation that we conform to a hearing world. My disability is often invisible, and I wanted to explain the relentless and exhausting attention that is needed for me to function. Deafness is far more complex than simply not hearing.

There are thousands more examples of the ways authors can write about living with disability. The International Day of People with Disability is a great time to start reading.

These books were reviewed by: 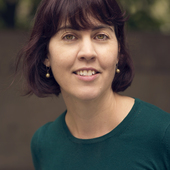