Eight Years of Moonlight is the fifth album from the iconic Australian group – Taman Shud.

Their history can be traced back to 1964 when this Newcastle based group, then called Four Strangers. were formed.

They trimmed their name to the Strangers at the end of 1964 and by late 1965 they had become the Sunsets.

They took the name Tamam Shud in late 1967 with the lineup being: Peter Barron on bass guitar, Dannie Davidson on drums, Lindsay Bjerre on guitar and vocals and Alex “Zac” Zytnik on lead guitar.

Their first two albums – Evolution (1969) and Goolutionites and the Real People (1970) were reviewed in my Cream Of The Crate review #206.

Then came this album, Eight Years Of Moonlight (2016). There is a later release – Resonate (2018) and I will review that in the next month or so.

So it is quite accurate to say that if nothing else, Taman Shud are survivors. However, that term suggests that they have just simply not faded away, but I am using it to be much more, and this album proves that they are as strong as ever.

So, what happened to Taman Shud after those halcyon years in the 1970’s?

To the delight of fans old and new, Tamam Shud reformed in 1994 with the 4-piece line-up of Lindsay Bjerre, Tim Gaze, Peter Barron and Nigel Macara.

They recorded a strong, energetic album of all-new material, Permanent Culture for Polydor, with songs by Bjerre and Gaze, and they undertook a national reunion tour, including TV appearances.

The first single, Stay (which features some scorching slide guitar by Gaze) was very well-received and had extensive national radio airplay, notably on 2JJJ; they made several, great live TV performances to promote it, including spots on The Doug Mulray Show and a blistering performance on the ABC’s “Recovery”. 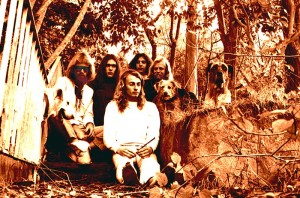 In May 2006 the band were also part of the “Delightful Rain” project. A celebration of Australian surf music recorded in their home territory on Sydney’s northern beaches at Freshwater Surf Life Saving Club which was released as a CD and DVD.

In 2016 the first all new Tamam Shud recording in over twenty years was released.

The “Eight years of Moonlight” LP/Download is a collection of all Lindsay Bjerre compositions. It is the culmination of eight years of creation, development and work by Lindsay and the band members in collaboration with John Cobbin and Maryanne Slavich at Moonlight Studios in Sydney, hence the album title reference to “Moonlight”.

The 2016 Tamam Shud band members performing on this recording were the same core personnel that originally came together in the early seventies in the “ Morning of the Earth” era and again in the 90’s for “ Permanent Culture”.

With a nice touch of irony, “Eight years of Moonlight “ was released as a limited edition vinyl LP record which includes a free download of all tracks plus a bonus track. The first new Tamam Shud vinyl LP produced since the bands inclusion on the “ Morning of the Earth” soundtrack LP over 40 years previously.

To get some info first hand, I spoke with Nigel who said – “As you can appreciate with so much material being written by Lindsay and Tim over 50 years we had the opportunity to play around with so many ideas over many years in various Tamam Shud formations.

Lindsay selected and formulated the chosen preliminary tracks with John at John’s studio Moonlight. Lindsay would then drop the tracks to me to learn the basics. Then we would make a date to congregate at the studio and I would lay down the drum tracks.

Subsequently Lindsay and John put the tracks together with Lindsay and Peter both playing bass on various tracks. Tim would come down to Sydney from Brisbane periodically to add his guitar and expertise.

In the end we all got together to do the vocals, overdubs and mixes. The album title is derived thus. We started the project in around 2007 and did a few tracks every few months or years finishing in around 2015.

It was recorded at John Cobbin’s Moonlight studios in Brookvale. Hence the name “ Eight Years of Moonlight”.

So, there we have it and let’s get onto looking at the album.

The first thing to mention is, that I have the vinyl LP – and that pleases me greatly as I am a vinyl fanatic.

Now, a good place to start is a track listing.

Let’s start with Side 1, Track 1, because that, in my world of recorded music, is the “calling card” of any album.

With Outer Reef, immediately we are reminded that the genesis of this group and its music was “surf-music. This is quite an inspirational instrumental. Of course the title Outer Reef was a bit of a give away but I was left feeling that these guys had not just lost nothing – they had gained much over the years.

Lindsay B wrings the notes out of his Fender Jaguar providing the listener with an “on the edge” sound at times, which I loved, while Tim G provided the more melodic element to this 21st century surf music track.

Track 2 – Hello. We hit the first vocal track. Now the bass and drum lines are great, they lock the track down wonderfully and the track has a guitar piece flowing through it.

When we come to Track 3 – it’s a different case with the vocals. Broken Chair kicks off with a powerful drums piece wonderfully supported by the thumping bass.  The guitar line really put a tingle up my spine. With this track the vocals are perfect.

They are really delivered with the right amount of emotion and and they are perfectly placed in the mix.

Track 4 – You Set Me Free is a really damn fine track.

The vocal delivery is more spoken than sung – but it is delivered just perfectly. It’s almost a good old fashioned “tripping track”, except it’s more like how surfers find their “god” through surfing, rather than drugs.

It’s a hauntingly beautiful track – maybe my favourite. It took a while to sink in, but I suddenly realised that at times it reminded me of the old classic – Temptation, by Bing Crosby, which goes waaaay back to the 1930’s. Not that Crosby ever sang like this and his band certainly didn’t play like the Shud!

I was tempted to only play you part of the track, as I am ever mindful of the tendency of some folk to not pay due respect to the artist, and just rip tracks off – but really, it needs to be played in its entirety – so if you like it, buy it!

You Set Me Free

Turning the album over (try that with a CD!), we are presented with Track 1 – House (Where I Belong)

A track that I suspect presents really well live. It’s an interestingly developed track and the way the guitars are used is well thought out. It is definitely a “Shud” track, and the use of (nicely) controlled feedback emphasises this, but, neither is it the strongest track on the album.

New Years Day is Track 2, and it is an interesting piece. It’s somewhat is a meld of surf music mixed with a more “punk” delivery. That is not to put the track down, in fact the almost “sneering” delivery really suits the style established by the music.

Again, it reminds us that in many ways, Shud should be seen live when possible.

Track 3 is Like A Mexican and it’s a good dance track being another track that would prove popular at live gigs.

It has a great vocal hook, “Like A Mexican” is a simple line, but it becomes repeated in such a way that it begs the audience to join in – and hey! surely one of the signs of a good track is, that it has a good hook!

This track certainly has it!

The final track is – Numb (Falling Down). This is a more down-tempo track that starts to bring us down, but in a good way, from the frenetic pace of some of the previous tracks.

It also showcases the ability of the group to provide great harmonically developed backing vocals mixed in with a well engineered and produced richness of the instrumentation.

It again reinforces the musicianship of the guys and, it also reminds us of the quality of the engineering and production.

If you are unable to move with the times, to move through their music from the past to the present, you may not be able to fully appreciate this album.

For me, I think the album rates highly. It reminds me that despite some line up changes over the years, Tamam Shud remain as one of the better exponents of a “surf music” based style.

It reminds us of those roots while, at the same time we are not being choked by them.

This album is well worth the 20 years wait. It reminds us strongly of the origins of the group and their music while showcasing their ability to remain not just relevant, but relevant with quality.

The fact that Eight Years of Moonlight is released on vinyl is a bonus – as any audiophile will tell you – you want quality? You want vinyl!

It is available on the Shud website for $30.00 and I encourage any Shud fan, any music fan and certainly any fan of quality Aussie made music, to add it to your collection.

Here is a clip from Youtube that features the opening track, a really great live performance of – Outer Reef

Rob Greaves
I have been with the Toorak Times since April 2012. I work as Senior Editor of the Toorak Times, but I also think of myself as senior contributor. I've been in the Australian music scene as a musician since 1964, and have worked in radio and TV and newspapers (when they were paper ), serious experience in audio editing, and a lot of video editing experience. Currently I'm working as a radio program producer for a national interview program as well as my work with the Toorak Times
Share
Facebook
Twitter
Pinterest
WhatsApp
Linkedin
Email
Print
Previous articleSunday essay: why we need children’s life stories like I Am Greta
Next articleRICHMOND TIGERS GRANNY WINNERS 2020

Tamam Shud are an Australian psychedelic, progressive rock and surf rock band who have survived 5 decades. Eight Years of Moonlight is the fifth album from the iconic Australian group - Taman Shud.   Their history can be traced back to 1964 when this Newcastle based...Rob GreavesReview: Taman Shud - Eight Years Of Moonlight