The Australian red ensign – a red version of the familiar Australian flag – has appeared all over the news and social media in recent months. The question is, why?

Historically associated with Australia’s commercial shipping vessels, the merchant navy, the flag has recently been adopted by people involved in anti-lockdown and anti-government movements.

It’s almost certain the flag has gained popularity due to its use by Australia’s sovereign citizen (or “SovCit”) movement, a fringe group who believe laws do not apply to them.

Since 2019, I’ve been researching the SovCit movement and the insights it reveals into public (mis)understanding of our legal order.

To understand why this particular flag is being flown requires a detour into their strange, conspiracy-laden, pseudo-legal culture.

Read more: Many anti-lockdown protesters believe the government is illegitimate. Their legal arguments don’t stand up

Who are the sovereign citizens?

Self-identifying sovereign citizens – and their counterparts the “Freemen on the land” – believe they possess a pure and true understanding of the legal system. The movement emerged in America, and has spread to Australia and other countries.

According to their version of the law, individuals are “sovereign”, meaning they are not bound to the laws of the country in which they live, unless they waive those rights by accepting a contract with the government.

While the movement has no single leader or central doctrine, SovCits believe that by reciting certain phrases, such as “I am a natural living being” or “I do not consent”, they can lawfully avoid any obligation to obey laws and regulations.

Like a magic spell, these phrases grant them a cloak of legal immunity, and beneath that cloak, there is no need to wear masks, pay taxes, or hold a driver’s licence.

To those with any understanding of the legal system, these arguments are without foundation. It’s not surprising SovCits struggle to distinguish between valid and fanciful legal arguments: we do a poor job  of educating Australians about how the legal system operates, and the system remains irreducibly complex and profoundly inaccessible to most Australians.

Nevertheless, SovCit arguments are devoid of any legal merit.

It is a mistake to think such eccentric movements are benign. Some SovCits have been identified as anti-government extremists and a potential terrorism threat in Australia, as well as in America.

The movement has gained prominence during the pandemic, with the “pick-and-choose” approach to legal obligations attracting anti-health measure activists, such as the infamous “Bunnings Karen”.

By encouraging people to disregard laws they don’t like, the SovCit movement presents an insidious threat to our legal order.

So what is the Australian red ensign?

Back to that strange flag. The Australian red ensign is the official flag flown at sea by Australian registered merchant ships.

In the early years of federation, the red ensign was an important symbol of Australian identity as the main flag used by private citizens on land and at sea. Australians have fought under it during both world wars.

Read more: Public protest or selfish ratbaggery? Why free speech doesn’t give you the right to endanger other people’s health

So, are fringe groups using it to suggest they are private citizens? The flag’s history suggests it’s not that simple.

At federation, Australia was not an independent country, but a dominion of the British empire. Australian citizenship did not exist until 1948, and the UK parliament could theoretically pass laws governing Australia until 1986.

So, in the half century after federation, the official flag for general use was the Union Jack.

Like the current governor-general’s flag, the Australian blue ensign was used only by the Commonwealth government. It did not become the general national flag until 1953.

Before that date, if citizens wanted a distinctive flag to signify an Australian rather than a British identity, they tended to (mis)use the Australian red ensign.

Why do SovCits use the Australian red ensign?

Unfortunately, the decentralised nature of the SovCit movement makes it difficult to reach definitive conclusions.

For a movement that has an inherent distrust of government, the flag’s historical usage as a “people’s flag” must seem appealing.

A similar appeal may derive from the fact the ANZACs fought under this flag (as Australian divisions of the British Army).

Indeed, RSL Australia has condemned the flag’s use by protesters as disrespectful.

Alternatively, the usage may derive from the maritime nature of the flag. One of the more outlandish claims of the SovCits is that the only valid sources of law are the common law and “admiralty law”. As such, a maritime people’s flag must seem like the perfect symbol.

There are darker possibilities, too. For some people, it could be an attempt to mirror the use of the Canadian red ensign by the far-right. In Canada, white supremacists see their red ensign as a throwback to a time when Canadians were overwhelmingly white.

In the US, the SovCit movement has explicitly racist and antisemitic roots, emerging from the Posse Comitatus movement led by the notorious preacher William Potter Gale.

A similar undertone may underpin the use of the flag in Australia, a racist yearning for a non-existent “golden age” when Australia was “free” and “white”.

To me, the use of this flag also suggests a yearning for certainty and a simpler past, that, though misguided and exclusionary, perhaps emerges from the collective trauma of the last two years.

In the minds of these fringe protesters, they are not law-breakers, but patriots who possess a deep and true understanding of the law.

Like the Australian red ensign itself, these movements take familiar images and ideas and twist them. 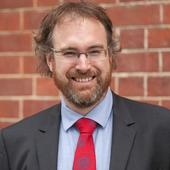 Joe McIntyre does not work for, consult, own shares in or receive funding from any company or organisation that would benefit from this article, and has disclosed no relevant affiliations beyond their academic appointment.