We are at the day of the nation’s annual ritual of celebrating the arrivals, while not formally recognising the ancient peoples who were dispossessed.

Each year the tensions spill over, rendering Australia Day/Invasion Day/Survival Day a protest as much as a celebration.

But there is a quiet process underway, aimed at achieving substantive recognition of the First Nations that has so far eluded Australia.

A new report on an Indigenous Voice

This process of constitutional recognition is now in its second decade — yes, it has been ten years since the process began. In early January, to kick off the second decade, Minister for Indigenous Australians Ken Wyatt released the Indigenous Voice Co-design Process Interim Report.

It runs to almost 300 pages and offers First Nations peoples about three months to provide a response.

The genesis for the Voice lies in the historic 2017 Uluru Statement from the Heart and First Nations’ preference for a constitutionally enshrined Voice.

The report is a solid first run at designing a Voice. It brings Australia a step closer to realising the Uluru Statement. But it falls short of the Voice to parliament sought by those consulted in the lead up to the Uluru Statement and the statement itself.

A Voice for the voiceless

Previously, I have set out the lengthy and complex process that has led us to this point.

I have also explained why First Nations people chose a constitutionally protected Voice as both symbolic and substantive recognition — and why a legislated voice is not able to deliver the transformative change communities so desperately need.

The push for a Voice came from the voiceless — those less likely to be afforded a seat at the table in Indigenous affairs — because the regional dialogues privileged their participation.

It was their view that those who filled the leadership vacuum left by the Aboriginal and Torres Strait Islander Commission (abolished in 2005) were unrepresentative. This includes ever-present and overbearing Commonwealth bureaucracy on Indigenous affairs and other organisations who purport to represent community but are not accountable back to community.

In 2018, the joint parliamentary committee on the Recognition of Aboriginal and Torres Strait Island Peoples — chaired by Labor’s Pat Dodson and Liberal MP Julian Leeser — found the Voice was the only viable constitutional option. But it also found the concept required more meat on the bones before Australians could vote at a referendum. It said this should be done through “co-design” with First Nations peoples.

The 2019 budget saw $7.3 million for a co-design process for the Voice and $160 million for a future referendum once a model is determined. The Coalition’s 2019 election policy also reflected the two-step approach:

A referendum will be held once a model has been settled, consistent with the recommendations of the [Dodson/Leeser] Committee.

The interim Voice report is the settling of that model.

A Voice to government only?

Wyatt has been clear in the past he is only designing a “Voice to government”, which aligns with his worldview as a career public servant.

However, the Voice interim report expressly sets out two components for comment: a Voice to government and a Voice to parliament.

The Voice to government component is one for First Nations communities to contemplate.

Only First Nations people on the ground can tell the inquiry whether the various local and regional mechanisms function in the way the report suggests they do. Only they can tell the government whether they feel their voices are represented effectively by the structures and entities that exist. This is why their input is so crucial to this report.

Read more: The Uluru statement is not a vague idea of ‘being heard’ but deliberate structural reform

They were also criticised for being unaccountable and not reporting back to communities about what they say and do in Canberra.

Even so, the interim report has some alignment with the Uluru dialogue’s deliberative method , this includes the proposed transitional arrangements for local and regional entities, allowing communities to conceive of and design new entities.

However, it is difficult to gauge whether this can give voice to the voiceless.

The Voice to parliament component of the interim report opens the door to submissions on a constitutional Voice. There is no other way to assess the efficacy of the legislated approach, which unsurprisingly falls short of the voice sought by delegates at the regional dialogues, the national constitutional convention and in the Uluru Statement.

This is because the Uluru Statement sought a mandated place at the table with the force of law. The interim report falls short of this by studiously avoiding power.

After all, it is based on legislation that can be overridden by subsequent legislation, which is par for the course in Indigenous affairs. Media reports talk of the “obligation to consult” on race power as if it is hard law, but this Voice is mediated by the government of the day and therefore the antithesis of what people sought.

It carefully crafts a process that still renders the voice supine to government. This is both in terms of reporting to a parliamentary committee and the transparency mechanisms, where inevitably, the government becomes the Indigenous Voice to parliament.

Read more: Yes, this continent was invaded in 1788 – an international law expert explains

The most prominent misalignment with the dialogues was they wanted a voice protected by the Constitution via a referendum, so it could survive successive governments and avoid being subject to the whim of the government of the day.

This would give our communities the certainty and security they need to make long-term plans for the future. First Nations peoples understand our affairs are a political football. And that our working and community lives are subject to a three-year cycle of one government to the next. It is a driver of disadvantage.

This is why so many Indigenous organisations are expressing disappointment at this proposal. The “anything is better than nothing” approach does not apply when the change is akin to the status quo; it just looks more officious with more squiggly flow charts.

A path to friendship

This is now an opportunity for Australians and First Nations peoples to make their views clearly heard. It is only an interim report, and it requires the feedback of many.

All Australians want to find a way through the annual debates about Captain Cook, the First Fleet and national identity, to a more inclusive and nuanced narrative of who we are.

Read more: An Indigenous ‘Voice’ must be enshrined in our Constitution. Here’s why

Survey research shows a clear majority of Australians want to recognise a First Nations Voice in the Constitution.

As we approach yet another national day replete with swirling toxicity, the path to friendship offered by the Uluru Statement — an expression of peace — provides a roadmap for Australia. 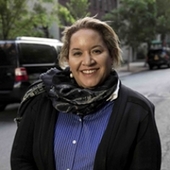 Megan Davis receives funding from the Australian Research Council and is affiliated with the Indigenous Law Centre, UNSW and was a Referendum Council member.