During the night of September 7 1936, the last remaining thylacine, or Tasmanian tiger, popularly referred to by the name of “Benjamin” since his death, died in the Hobart Zoo. The official cause of death was neglect/exposure. Benjamin’s passing marked the extinction of a species.

Only 59 days before Benjamin died the Tasmanian government had introduced legislation to protect the species – a seemingly pointless gesture. The creature had been held captive in the zoo for three years before his death, and during that time my grandfather recalls seeing him.

To my mind, the extinction of the Tasmanian tiger is one of the single greatest tragedies in Australia’s history, so recently I asked my grandfather what it felt like being there; to which he replied: “Honestly, we didn’t think much of it at the time.”

Two years before the passing of the last Tasmanian tiger, artist and illustrator Percy Leason painted 46 portraits of Aboriginal people from Lake Tyers mission in Victoria. They were exhibited as The Last Victorian Aborigines and were designed to capture Aboriginal people before they became – as was popularly expected – extinct. Leason’s motivation to paint may have been rooted in salvage anthropology, but the images themselves have more to offer than a practical, ethnographic record.

Leason’s portraits are a window in time. They speak of a period when people were categorised by their blood. He labelled his subjects “full bloods”, a term used to signify that a person had no non-Aboriginal ancestry.

Although Australia has officially rejected the notion of blood quantum and genetic arithmetic, even today there is a popular and erroneous perception that it is possible to measure the proportion of Aboriginal and non-Aboriginal ancestry through “blood”. Light-skinned Aboriginal people frequently have their authenticity questioned and their identity challenged.

There can be no doubt that generations of settler Australians descend from Aboriginal ancestors, unacknowledged and unremembered: using the terminology of the day, half-castes gave way to quadroons and then to octoroons, and then for many they simply became “Australian”.

Of course, this too represents a kind of extinction. Although the idea that Aboriginal people were a dying race had circulated since the late 19th century, and it found renewed interest in the 1930s. This zenith of the extinction discourse also found form in Daisy Bates’s serialised articles, which were later edited into The Passing of the Aborigines.

That Leason almost simultaneously painted what he called the “last Victorian Aborigines” is emblematic of these ideas. For him, these portraits of what he called the last “full bloods” tied him to both the popular idea of extinction and salvage anthropology.

Well regarded by his peers, Leason achieved significant status as an artist in his time. The Last Victorian Aborigines drew great crowds of people when it opened at the Athenaeum Gallery in September 1934.

The exhibition coincided with the Melbourne centenary, and at this time people all over the city were thinking about the future. Leason’s portraits spoke about the future, by depicting what he considered to be the past.

Reflecting on this now, I can’t help but wonder what curiosity it was that drew in audience members. It is clear from reviews of the time that both Leason and the wider community considered the portraits anthropological exercises; they were a catalogue of loss, a record of extinction. The audience might have acknowledged the tragedy and the melancholy sadness the images were thought to represent, but one wonders if many also considered them nostalgic, perhaps with the wistfulness of regret.

Natural scientist and anthropologist Donald Thomson photographed the same people Leason painted, and for the same reasons. In this way Leason saw himself as being like Thomson: both were impassive recorders, both were anthropologists, both were cataloguers, both were deliberately ethnographic in their approach. The difference was that Leason believed his portraits were superior to Thomson’s photographs.

There is undoubtedly a certain success in Leason’s portraiture that is lacking in Thomson’s photography. He captures a tenderness and humanity Thomson overlooks.

Leason’s gestural brushstrokes and delicate use of light suggest a hesitancy in his approach. He sees an elusiveness in his subjects: these are an ethereal, fragile people, on the brink of extinction. His portraits preserve and record them for posterity.

Thomson’s 50mm lens, however, is both literal and frank. It is possible, if not likely, that the stark and uncomfortable body language and expressions seen in Thomson’s photographs were also present in Leason’s studio. His chosen medium allowed Leason to capture an essence of his subjects that Thomson’s photographic techniques missed; painting also allowed him certain liberties that photography did not.

Photography, while never strictly objective, does at least have an obvious connection to reality. The subjects in a photograph exist as they appeared, at some stage or another.

Of course, subjects are posed, backgrounds contrived and compositions carefully curated, but the photographer is never able to entirely control the image. The subjects have agency, and they can and do “stare back”.

Painting, on the other hand, allows an artist a greater opportunity to interpret their subject. The way in which Leason’s portraits interpret their subjects infers a meaning that does not necessarily have any bearing on reality. They show a vanishing people, faces literally fading into the background – these Aboriginal faces are like water in your hands, slipping away. They are fuzzy.

Thomson’s photographs are undeniably real. They represent a culture that, despite Leason’s suggestions, is not going anywhere.

The logic of elimination

Artistic licence enabled Leason to frame his subjects so they seem aware of their supposed fate, giving this supposed fate an air of inevitability. In the 1930s there was a practical, economic advantage for settlers like Leason to suggest that Victorian Aboriginal people were becoming extinct. Aboriginal people were seen as an obstacle to land acquisition. The late historian Patrick Wolfe referred to this as settlement based on “the logic of elimination”.

Leason’s subjects were not passive. Edward Thomas Foster, like all Leason’s male subjects, was shirtless. His arms folded behind his back push forward his chest, clearly showing his scarification marks. While Leason had control over the painting, it appears Foster subverted his interpretation. His eyes are sharp and intense, perhaps more so than any other portrait.

Clara Hunt, a senior woman and noted weaver, was described by Leason as reluctant and shy. Her portrait is unlike the rest of his female portraits, as she is fully clothed. Her expression appears resolute, if not severe.

Mrs Hunt had disrobed for a photograph by Thomson earlier, but seemingly in an act of defiance she refused for Leason. Mrs Hunt was the oldest woman to pose for Leason, and perhaps it was due to her seniority and position that she was able to subvert the artist’s request.

In the years since Leason’s death in 1959 his popularity and reputation have faded. The legacy of these infamous portraits, however, is still very well known. Perhaps most importantly they remain for contemporary Aboriginal people an important and elegiac reminder of their ancestors.

As a record of a dying race they inevitably failed. And yet many people have internalised the same logic of elimination that links authentic Aboriginality to blood. The term “full blood” may have been dropped in everyday conversation, but questions like “What part Aboriginal are you?” are still incredibly common for Victorian Aboriginal people.

It seems Leason never moved past the notion that Aboriginal people in Victoria were defined by their blood; however, years after painting the portraits, he did reflect back on the series and say:

This is an important point, because it shows that there was a moment when Leason eventually recognised the humanness of his sitters.

The 46 people in Leason’s portraits convey a duality: on one hand they exemplify his misunderstandings by seeming resigned to their fate; on the other they subvert it by refusing to disappear, by the continued existence of their culture today. They are depicted as resigned, when they were not. They are described as vanishing, when they were not.

Victorian Aboriginal people today do not find our identities rooted in blood quantums, but rather in our awareness, our histories, our characters, our families.

In what I can only describe as a historical coincidence, Percy Leason was born two years after my Aboriginal great-great-grandmother, in the same region. Land records list them as neighbours. Perhaps he played with her, or attended the school that was 50 metres beyond their property boundary – I will never know. Yet I can look at the portraits he created and wonder, was his sensitivity the result of lifelong contact, or is it a vicarious connection that has led me to such a sympathetic reading? 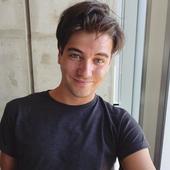 This article is published in the catalogue for the exhibition Brave New World: Australia 1930s, which is showing at the National Gallery of Victoria until October 15 2017.