Songwriter Andrew Farriss is wrapping up a massive week at Tamworth Country Music Festival, celebrating the release of his second solo country single – Good Momma Bad – with the announcement he is part of the revered Australia Day Honours List. Appointed a Member Of The Order of Australia (AM) for his significant service to the performing arts as a musician, composer and producer. This includes 12 studio albums with INXS and 62 singles, collaborations with artists including Jenny Morris, Tania Kernaghan and Yothu Yindi to name a few, and his recent solo works, of which his debut solo album will be released in May.

Andrew extends his appreciation for all the support he has received throughout his career. “I want to thank my family – my children Grace, Josie and Matthew – and my wife Marlina,” he says. “I would also like to thank my fellow bandmates from INXS, who I have shared so many great experiences, as well as the amazing artists I’ve been privileged to work with throughout my career. Thank you to everyone for embracing my new country music. I really appreciate the people who submitted me for this honour – I feel a very proud Australian, very grateful and humbled.”

Andrew Farriss AM needs little introduction to music fans – country or beyond. As the main songwriter and a founding member for international icons INXS, Andrew Farriss is considered one of the world’s best musicians. With them he shared success of more than 50 million records, Grammy nominations and an induction into the ARIA Hall Of Fame. Outside of INXS, he is revered in industry circles for his songwriting nuance, having written, produced and performed music for numerous artists. His focus on the music – regardless of genre – saw him inducted into the Australian Songwriter’s Hall Of Fame. In recent years, he has been co-writing with some of the biggest names in Nashville, including the likes of Grammy-award winning songwriters Gordon Kennedy and Paul Overstreet, as well as veritable country music songsmiths Frank J Myers, James Dean Hicks and Bruce Wallace to name a few.

With the release of his new single Good Momma Bad, Andrew is solidifying his reputation in the country music scene. The release of his first country single Come Midnight late last year gave an insight into a musical direction that was all about the songwriting and music. Embodying an old-school country vibe was fitting for an artist who has been living on the land for more than two decades, running a functioning cattle and grain farm. Andrew’s latest single continues the storytelling ethos that will be showcased in his self-titled release. Good Momma Bad draws you in with its funky instrumentation, aptly demonstrating why Andrew is considered one of Australia’s most formidable songwriters – for any genre. Recorded in Larry Beaird’s Nashville studios with some of the best country musos on the music scene, the final version was exactly was Andrew envisioned when penning the track. 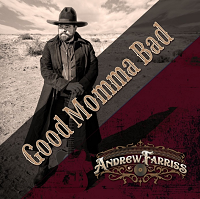 “I wanted Good Momma Bad to have a strong funk groove played with country music instruments such as fiddle, mandolin, acoustic guitar and pedal steel,” says Andrew. “Good Momma Bad was a great recording session, we approached it in an old-school Nashville way, with the emphasis on playing live wherever possible, which was also exciting to get the right take and feel. I co-wrote Good Momma Bad with James Dean Hicks and Buck Johnson. Everybody, no matter what, needs a good mother, and no one gets through life without help from other people. The sad truth is not everyone has a good mother, and consequently people suffer during and in the midst of life. Many need much more love and support in their lives.”

Andrew’s new single Good Momma Bad is out now. Andrew’s self-titled debut album is released 15th May 2020 and is available for pre-order via https://ffm.to/andrewfarriss-album

By persisting with COVIDSafe, Australia risks missing out on globally trusted...

Dan Vogl gives a glimpse of ‘If I Die’ live ahead of...