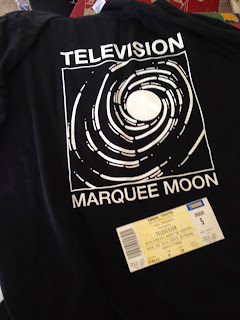 RUMINATIONS AFTER SEEING TELEVISION AT THE ENMORE THEATRE OCTOBER 30, 2013.

After realising I wasn’t cut out to be an English, Speech & Drama teacher I left Launceston in the mid 1970s for Adelaide to pretend to study at Flinders University, considered then to be the most radical university in the country. Initially I lived in the suburb of Collinswood in a big spiralling typically Adelaidian sandstone house with the also re-located-from-Launceston David Woodhall and his girlfriend and her sister.
David was presenting the rock show on the recently established ABC FM station right around the corner from where we lived. At the time the station didn’t have much of a record library so David and I concocted a plan whereby I’d put my rather large record collection in the ABC library and charge them a weekly fee (maybe $30 which was about a third of what you needed to live on in those days) for the use of them. If I woke at night with the burning desire to hear a particular album I’d just wander around to the ABC and borrow it back.
One album that never seemed to make it to the ABC library was Television’s debut album Marquee Moon which was released in 1977. It seemed like we played the ultra thin Australian pressing of the Elektra album till we wore out the grooves. Night after night after night.
There were the stock standard record shops in Adelaide in those days and two that we gravitated to. There was a small import store in a little arcade off Rundle Mall and then a guy called Bo opened a shop in a little side street not that far away. It was called Modern Love Songs and it quickly became the mecca for every punk/new wave fan in Adelaide. it’s where I bought albums and singles by not only Television but The Ramones, Patti Smith, Blondie, Iggy Pop, Pere Ubu, Richard Hell, Talking Heads, Dave Edmunds, Jonathan Richman & The Modern Lovers, Generation X, The Clash and so many others. It was the place where if you were lucky you might pick up an original (or pseudo) copy of Television’s debut single Little Johnny Jewel on the Ork label from 1975.

Without sounding too old and I was there-ish, being a music fanatic was different in those days. Put it this way – the morning the Sex Pistols’ Never Mind The Bollocks came out there was a queue right down the block from Modern Love Songs waiting for the doors to open. I was in that queue. It’s awhile since I’ve seen that if you get my drift.

Amidst all this music Television always seemed so cool and mysterious. Marquee Moon and it’s follow up Adventure from 1978 (which I sometimes prefer to the debut) were the constant soundtrack to those years. Tom Verlaine and his mates Richard Lloyd, Billy Ficca and Fred Smith were creating this seemingly timeless aural genius that we listened to again and again and again.
Unlike most of their contemporaries Television never toured Australia which just added to the mystique. About ten years ago they did a couple of shows in New York City whilst I was there. I was exhausted after a gruelling SXSW and two weeks of tramping the streets on NYC and just couldn’t raise the energy levels to get out – a decision that will continue to haunt me forever. I remember David Fricke, who naturally went to both shows,  gently chiding me: “Stuart, don’t worry, they’ll do it again in, well, maybe 15 years.”
Which sorta brings us to 2013 when Verlaine, Ficca and Smith along with long standing replacement for Richard Lloyd, Jimmy Rip are in Australia, initially for All Tomorrow’s Parties and then for some additional shows in Sydney, Perth, Auckland and Hobart.
“I just met Tom Verlaine smoking a cigarette up the road outside” grinned my awestruck friend Ken Gormley as he walked into the Enmore Theatre. It was that sorta night. Predominantly male fans of a certain age coming to see something that most of us never expected to experience. Television.
Hipsters were bemoaning the absence of Lloyd but there was no cause of concern as Rip proved to be every bit the inventive foil for Verlaine that Lloyd had once been. The set was essentially Marquee Moon (but not in the order of the recorded version) along with Little Johnny Jewel, a couple of other songs and a closing cover of the Count Five’s Psychotic Reaction.
As expected Television made few concessions to the occasion. The lighting could only be described as basic. There was a constant hum from the PA almost all night, along with a lot of between song tuning. And whoever was hired to mix Verlaine’s vocals was obviously only paid to turn up for the last four songs. But it was Television. Glorious, glorious Television. They soared. They cajoled. They teased. They were ferocious. They were gentle. They were just cool. I kept looking at them and my over-riding throughout was “wow, these guys have experienced New York City since at least the early 1970s. This is the sound of that city and I’m so jealous I’m not them”.
Of course I bought a T shirt. Then I came home, fired up the turntable and listened to Marquee Moon for the 1345th time. I was in Lewisham. I was in New York City. And I was in Adelaide in 1977.
Share on FacebookShare on TwitterShare on Linkedin