Home SCIENCE/TECHNOLOGY ANIMAL WELFARE Photos from the field: Australia is full of lizards so I went...

Though it may not be as famous a stereotype as shrimps on the barbie, deadly snakes or Vegemite, Australia is renowned in certain scientific circles for being the “land of the lizards”.

Australia has a higher diversity of lizards than anywhere else in the world. The number of different species within a single part of remote, central Australia well exceeds similar desert environments, such as the Kalahari in Africa, or the US.

Over the last 50 years, scientists have tried to understand the cause of this extraordinary and unique diversity.

Some suggest unpredictable resources in the arid outback, such as sporadic rain, favour low-energy animals like lizards over birds and mammals. Others claim a high diversity of termites allows lots of different termite-eating lizards to co-exist.

Or perhaps the presence of shrubs, sparse trees and grass clumps provide a variety of niches (microhabitats) for tree and litter dwelling species. Despite these many hypotheses, no consensus has ever been reached.

My research explores the role of spinifex, a spiky clumping grass that’s typically found in the arid outback, often in conjunction with lizard diversity hotspots.

With many species found nowhere else on earth, some Australian lizards are threatened with extinction. Understanding how and why lizards use this iconic outback plant can help us conserve them, by predicting how they might respond to disturbances such as habitat loss and climate change.

Following many trips to the outback, I was surprised to find locals who had never encountered some of the species I was studying. Taking photographs of these often small and overlooked animals helps me to better engage the community and raise the wider public profile of lizards, compared to other, more “charismatic” native animals.

All 60 species of spinifex grasses (members of the Triodia genus) are found only in Australia. Although spinifex habitats cover more than one-fifth of mainland Australia, the plant is little-known and little-loved by non-naturalists.

Spinifex typically forms a spiky and impenetrable clump that provides useful, and in some cases essential, resources to lizards, birds, mammals and invertebrates.

But despite the close association of many lizard species to spinifex, we still don’t know exactly why reptiles like it so much.

Three ideas dominate. First, spinifex may contain lots of food for lizards, such as termites or ants.

Alternatively, the spiky, needle-like leaves of spinifex may offer small lizards a great place to hide from predators. And finally, temperatures deep within a dense spinifex hummock can be very cool compared to the searing desert heat, where temperatures can reach a scorching 50℃.

My research aim is to work out which, if any, of these explanations is true. I do this by measuring variables such as temperature, invertebrate abundance and risk of becoming prey, in spinifex and other plants.

Alongside my supervisors, I have also conducted behaviour trials on a couple of spinifex-loving lizard species: the mallee ctenotus (Ctenotus atlas) and the mallee dragon (Ctenophorus spinodomus).

We have recorded 230,000 temperatures, caught 16,089 invertebrates, constructed 112 lizard models and classified 143,627 behavioural observations. But such is the complicated nature of the work, we’re only partially closer to understanding the lizard-spinifex relationship. So far, our data suggests temperature is a key component.

Read more: Does Australia really have the deadliest snakes? We debunk 6 common myths

The photos below are generally a result of good fortune and spending inordinate amounts of time in wild places. Pictures of some of the smaller, more skittish animals were taken upon release from pitfall traps.

The above two photos show my study species: the mallee dragon and the mallee ctenotus. Despite one lizard being a skink and the other a dragon, both species are strongly associated with spinifex. The skink tends to forage within spinifex, whereas the dragon emerges into open patches adjacent to spinifex to eat and “signal” to other dragons.

Spinifex grass, pictured above, with its spiky, needle-like leaves, creates valuable habitat for numerous species of birds, mammals and invertebrates — not just reptiles. Its abundance and influence on many species make it a “foundation species”.

This photo above shows a Burton’s legless lizard (Lialis burtonis) — a predator of my study species. These snake-like reptiles are specialist lizard hunters and often use the dense cover of spinifex to their advantage to ambush passing lizards.

Legless lizards might look a bit like snakes, but they have different ancestries and subtle distinguishing features, such as the lizard’s eyelids and external ears, which snakes don’t have.

But many other animals live in or near spinifex, and would happily make a meal of small lizards, including those shown in the following photos. The ability of numerous predators to access the centre of spiky spinifex clumps throws some doubt on the idea spinifex is used as protection from predators.

We can’t claim to have cracked the case yet. But we’re a step closer to unravelling the secrets behind one of Australia’s remarkable, and under-appreciated, biodiversity stories. 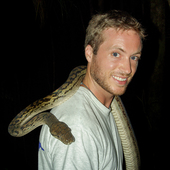 The Current Gambling Regulations in Australia and New Zealand and Potential...

Who’s who in Glasgow: 5 countries that could make or break...