The origin of the SARS-CoV-2 virus, which has caused the COVID-19 pandemic, has been hotly debated.

This debate has caused substantial difficulties in the Australia-China relationship, with a call by Foreign Minister Marise Payne for another inquiry into its origin being considered by China as a hostile act.

What’s not in doubt is the closest relatives of the virus are found in bats. How, where and when the virus spilled over into humans is the contentious issue.

One widely supported hypothesis is the spillover occurred in the “wet markets” of Wuhan, where many species of wildlife from across China are held in crowded conditions.

However, there’s no evidence the species of bats in which the closest relatives of SARS-CoV-2 are found were sold through the Wuhan wet markets at any time in the two years before the pandemic. This hypothesis requires the existence of a “bridge host”, another species that becomes infected via spillover from the original bat hosts, and then passes the virus onto humans.

Bridge hosts are well-known in many emerging human diseases. For example, Hendra virus, which my group studies, has flying foxes as its reservoir. Hendra spills over to horses with some frequency. Horses then amplify the virus as a bridge host and can infect humans.

Fortunately, this is extremely rare, with only seven known cases. Tragically, four of those people died. Hendra has never been known to spread directly from flying foxes to humans.

Read more: I was the Australian doctor on the WHO’s COVID-19 mission to China. Here’s what we found about the origins of the coronavirus

A second, much more contentious hypothesis is the origin of the pandemic was the result of a “lab leak”.

Wuhan has one of the most sophisticated virological laboratories in China, and the laboratory does work on bat viruses. The suggestion is the virus may have inadvertently been released into the general community via one of the workers. No direct evidence supports this hypothesis.

A new pre-print study, released online this month, provides strong evidence to support the “natural spillover” hypothesis, with results that are hard to reconcile with the “lab leak” hypothesis.

The study is yet to be peer reviewed. But it’s based on a detailed examination of the genetic sequences of two early lineages obtained from people infected in late 2019 and early 2020.

If there was a single lab escape event, the separation into lineages A and B must have happened after the lab escape. We would therefore expect to see a substantial number of intermediate lineages, with the lineage A nucleotide at one site, and the lineage B nucleotide at the other site.

However, if almost all of the genetic sequences obtained from humans are “pure” lineage A or pure lineage B, this suggests there were at least two different spillover events, either directly from bats or via bridge hosts.

And the evolution of the two lineages occurred before humans were infected.

The researchers downloaded all complete genetic sequences for SARS-CoV-2 that had been lodged in a widely used genomic database. Of these sequences, 369 were lineage A, 1,297 were lineage B and just 38 were intermediates.

Genetic sequencing isn’t perfect. Close examination of the 38 intermediates strongly suggested they were more likely to be sequencing errors of pure lineage A or lineage B than to be true intermediates.

Did a human bring SARS-CoV-2 to the wet markets?

The data don’t tell us there have been only two spillover events — there may have been more. Nor do they tell us whether these spillovers happened directly from bats, or whether some or all happened via an intermediate bridge host.

A Nature news article suggests this evidence points to the spillover having happened via the wildlife trade, but I think this is taking it a step too far.

While some of the wildlife species sold through the Wuhan wet market can indeed become infected with SARS-CoV-2 (for example raccoon dogs and mink), there’s no evidence any sold through the market were infected.

Many of the earliest human viral sequences (all lineage B) were recovered from the Wuhan seafood market, but wet markets and abattoirs are well-known to be places where the SARS-CoV-2 virus spreads very well from human to human.

So, it may have been a human who brought the virus to the Wuhan seafood market, rather than a species of wildlife.

One thing we do know is this pandemic originated through a human coming in contact with another species infected with the virus.

It’s unknown whether this was a bat or a bridge host, and whether this contact occurred in a wildlife market, or in a bat cave, or somewhere else entirely different.

Nevertheless, as humans encroach more and more on the habitats of wild animals and as wild animals are brought more frequently into close contact with humans, we can expect further spillovers and pandemics to occur.

Read more:How will Delta evolve? Here’s what the theory tells us 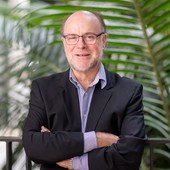 Hamish McCallum receives funding from the Australian Research Council and from the US agencies NSF, NIH and DARPA