In 2018, I’ll quit smoking, really. And I’ll stop drinking alcohol, at least for a while…

The first month of the year is traditionally a time for healthy resolutions. Many in the United Kingdom start off with “Dry January”, the idea being to foreswear alcohol completely in the month following the festive season. (Whether there are health benefits or not is another question).

While France may be famous for its hundreds of varieties of cheese and great fondness for champagne, its residents are inundated with health advice from public authorities. We are told what we must, and must not do, to get and stay in shape. Last year, the French national health agency and the National Cancer Institute told us that we should refrain from drinking more than 10 glasses of alcohol per week, while the French Agency for Food, Environmental and Occupational Health and Safety (Anses) encouraged us to consume less sugar, fewer deli meats and more vegetables.

In the minds of many, preventative health has thus become synonymous with self-deprivation, restrictions and obligations, a situation I outline in my book Questioning Public Heath (La santé publique en question(s) in French), published by the EHESP School for Public Health.

It could be argued that, in the long term, too many warning messages may be counterproductive, or even overwhelming – and therefore bad for our health. Rather than banishing pleasure from our lives, might there be another way to maintain our health and well-being?

To sum it all up, we must not: smoke (neither tobacco nor cannabis), drink alcohol (even in small quantities), take recreational drugs, have sex without a condom (unless it’s with a long-time partner), eat too much sugar or fat, go to places where there is too much noise, or drive under the influence of drugs or alcohol.

On the other hand, we must: exercise regularly, eat fruits and vegetables (at least five or more servings per day), limit our intake of red meat and deli meats, wear a mask when we exhibit flu or cold symptoms, buckle our seatbelts before driving, stick to the speed limit, wear a helmet when cycling and use earplugs at a loud concert or in a nightclub.

Over time, warnings about individual risks can pile up to form a set of contradictory, irreconcilable instructions. For example, a walk in the forest would help you to get some exercise and breathe some clean air – but if you’re in an area with a tick infestation, this walk would increase your risk of catching Lyme disease. So what should you do?

Public-health campaigns are often alarmist – shock images on cigarette packets (a corpse’s foot in a morgue, or worse) or road-safety films with enough blood to qualify as slasher flicks. Few use a positive approach, as did a 2014 campaign in France to combat car crashes. Titled “We all have good reasons to stay alive” (“On a tous une bonne raison de rester vivants”), it focused on relationships – between parents and children, for example – that are worth protecting.

But it doesn’t stop there. In addition to all the messages from public authorities, magazines and websites dispense swathes of advice aimed at assisting us in our quest for health and eternal youth, that holy grail of modern societies. So we learn that it is also best to avoid milk, eat gluten-free, consume more omega 3 than omega 6 oils, steer clear of all radio waves and electrical signals and avoid re-using plastic bottles for drinking. Each day comes with its own “health tip”, often backed up by a doctor with impressive – or sometimes dubious – academic qualifications.

The tools available with new technology have increased this pressure: we can now monitor the number of steps we take in a day. A high number is ideal, although no one knows exactly how many because estimates vary. A Swiss hospital specializing in obesity recommends one daily 30-minute walk, whereas the World Heath Organisation (WHO) sets the bar somewhat lower, at 150 minutes of moderate-intensity aerobic exercise per week for adults under 65, i.e. 20 minutes a day on average.

Mobile phone apps now allow us to “scientifically” analyse the way we eat and, in theory, improve our diet. Our driving style will soon be analysed in real time by our cars. Each risk can therefore be countered with an app designed to help us adjust our behaviour.

Are we really rational creatures?

It could be assumed that as scientific knowledge progresses, the easier it will be for us to adopt healthier behaviours. But this assumes that we are rational creatures and that if we try to avoid or deny this information, we simply lack the appropriate psychological, social or cultural tools. Yet we humans are not – or at least not completely – rational beings.

It is possible to take an alternative view of health education, one that is different from a moralizing, normative vision, where experts decide what is good and bad for the population (based on epidemiological studies, but also on their own values) and try to influence behaviour with do’s and don’ts. The basic principle of this alternative approach is autonomy, the reinforcement of individual capacities, or what might be called “empowerment”.

The first step is to restore the concept of pleasure into public health messages. The French campaign “Moi(s) sans tabac” (“Tobacco-free me/month”) is a good illustration of this approach. It focuses on group emulation and positive reinforcement of the former smoker’s commitment to quitting. Still, further research is required: Is taking pleasure in life a prerequisite to adopting healthy behaviours, or is it the other way around? And how can we reach young people, for whom breaking the rules is part of how they construct their adult identity?

Now is also the time to ditch tired clichés and drop the caricatures that litter health messages – that those who adopt unhealthy behaviours are isolated and unhappy, while people with the “right” attitudes are good-looking, fulfilled and socially well-integrated.

Above all, rethinking preventative health means taking into account the different environments in which we live. All individuals have free will, but it’s easy to forget that our surroundings also influence our behaviour. Obesity does not manifest itself in the same way across different socio-economic categories, or in different regions. Smoking and drinking are partly associated with seeking peer approval. And these are just two examples.

Therefore, preventative health should be subject to debate; citizens must participate in its design. This means that experts need to communicate all their knowledge on a topic, but also their doubts. Should we walk for 20 or 30 minutes a day to see benefits for our health? Let’s have an open, well-informed debate. Experts should specify the behavioural changes they consider beneficial, but also be prepared to rethink them. A campaign to reduce alcohol consumption would not be seen in the same light in a French wine-growing region as in other areas of the country, nor in Scotland, famous for its whisky.

Public health actions should involve those concerned. Campaign designers should listen to people’s experiences relating to health and respect their culture, while still challenging their preconceptions. For example, we might wonder whether preventative campaigns against HIV and STIs should really be limited to promoting abstinence in young people and fidelity in marriage so as to avoid clashes with religious authorities, as has been the case in some countries.

Local initiatives should become the main priority, while regional and national strategies would be designed to give them extra weight or impetus. Public debate and engagement take place most effectively at a local scale.

Let’s leave room for local initiatives to blossom and provide them with scientific data on their chosen topics and techniques for measuring results. We should also create favourable conditions for initiatives at the regional, national and international level. Supported by the WHO, the French Health and Cities Network (réseau français des Villes-Santé) provides one such framework, bringing together 80 cities of all sizes and from across the political spectrum, from Amiens to Fort-de-France, Rennes, Calais, Béthune, Paris, Lyon and Marseille.

The sometimes-contradictory rules laid out by health authorities on alcohol, diet and sexual practices end up paralysing individuals. They fill our heads with a minefield of urgent dangers, leaving us with no clear path forward. It is time to develop targeted preventative health strategies, and to take into account all the factors that collectively influence our behaviour. It’s time to bring pleasure back to healthy living and collective well-being.

Translated from the French by Alice Heathwood for Fast for Word. 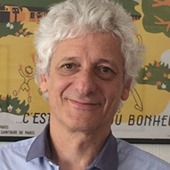