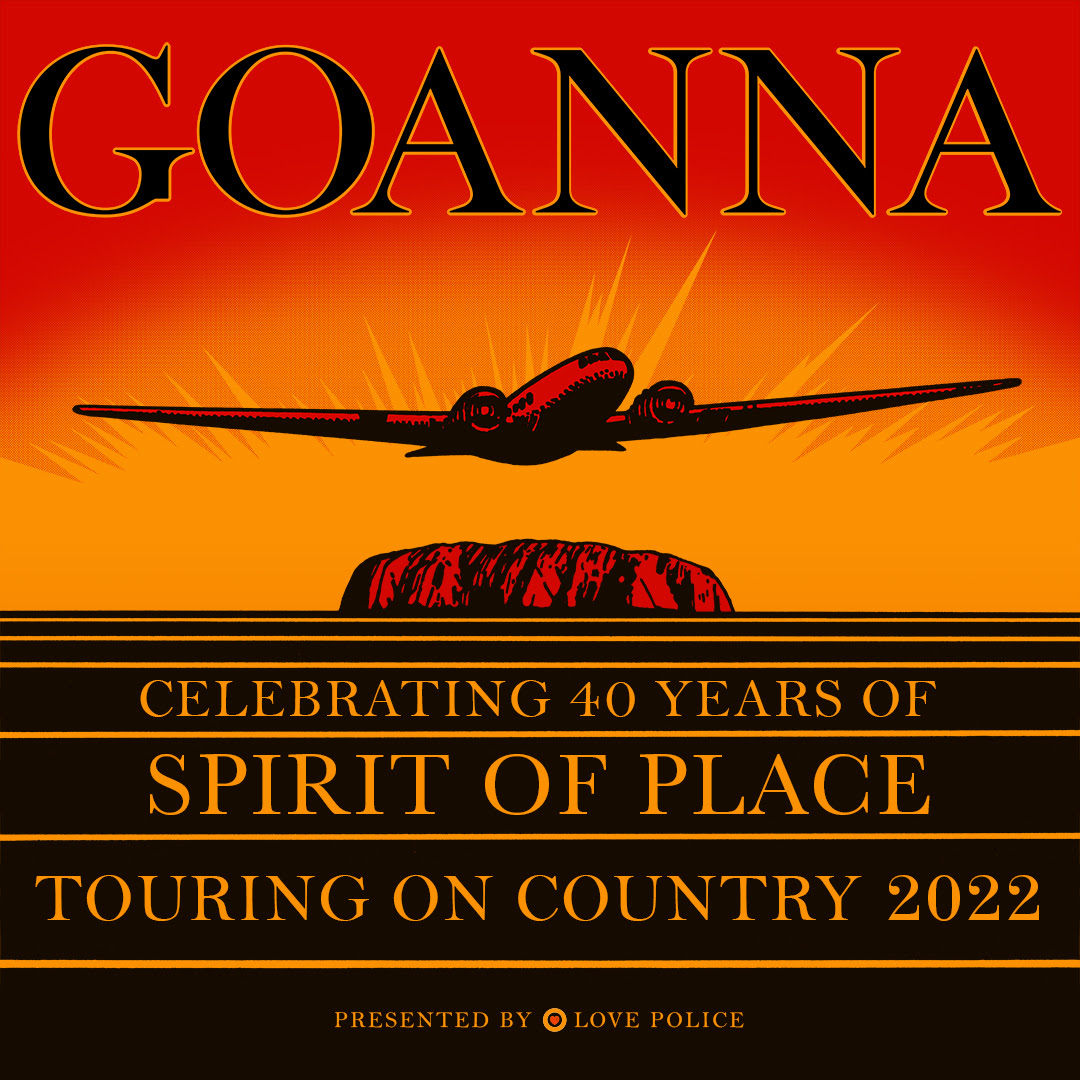 GOANNA – MEMORIES OF CAIRNS, THE GOLD COAST, BRISBANE, MACKAY, ROCKHAMPTON, ALICE SPRINGS AND DARWIN (Click to view on YouTube)
The band have put together this short film recounting stories from their early days touring in Qld and the NT. It goes for just over 3 minutes and is a lot of fun – please check it out and share.

Forty years on, and with their messages of positive engagement in Indigenous rights and environmental protection more relevant than ever, GOANNA this week begin an extensive national tour to commemorate and celebrate 40 years of their acclaimed, multi-platinum debut album Spirit of Place and the album’s truly iconic first single “Solid Rock”.

The group announced the tour following a celebratory performance at WOMADelaide in March, and followed the announcement with a three-show run as special guests of old mates Midnight Oil on their farewell tour. Other than these performances, the Celebrating 40 Years of Spirit of Place tour comprises the group’s first full-band shows in over 20 years.

The 40th Anniversary tour kicks off on Saturday night in Cairns and then takes in other Queensland centres before moving to the Northern Territory. They then take a break, resuming for a longer run in September through to December. The tour will take in all capital cities and major regions, from the Top End to Tassie – currently around 25 shows with more to be added.

The core trio and ever-beating heart of Goanna – Shane Howard, Rose Bygrave, and Marcia Howard –  will be joined for the tour by original Spirit of Place guitarist Graham Davidge and a stellar line-up. The group will be joined on stage by special guests, and each night will feature a hand selected special guest as opening act. The Queensland openers have just been announced, and are as follows:

Join this iconic Australian group as they embark on a new journey, paying homage to the classic songs from their early days and reigniting the Goanna spirit once more.

In the early ’80s, during Australian rock’s golden age, Goanna came out of Victoria’s surf coast and helped forge a new national identity. Before Midnight Oil and Paul Kelly addressed similar issues, the iconic “Solid Rock” stoked a fire for Indigenous rights that hasn’t gone out, while the latter anthem “Let The Franklin Flow” was a call to arms for the emerging environmental movement. Soulful, lyrical, brimming with musicality and creative volatility, Goanna mixed classic folk song craft with spirited and rootsy rocking, helping to establish a musical thread that remains vital and ubiquitous in Australian music today.

Goanna’s place in Australian history extends well beyond that of a hugely popular rock group, although they were that, and they came to prominence during the golden age of Oz rock. “Solid Rock” remains one of the most resonant songs in Australian music. At the invitation of Master didjeridu/yidaki player, William Barton, Goanna singer/ songwriter Shane Howard opened ABC TV’s nationally broadcast January 26th Live concert this year, performing “Solid Rock” with Barton, Emma Donovan, the Kari Singers and Iwiri Choir, along with a traditional Ngintaka (Goanna) Inma (song and dance), led by Anangu cultural artists, Tapaya Edwards and Rene Kulitja. The performance also featured a stunning digital animation recreation, by First Nations artist Brett Leavy, of ‘The white sails in the Sun’ of the First Fleet arriving in Sydney Harbour, witnessed by Aboriginal people, ‘standing on the shore’.

The Goanna Band, as they were originally called, first appeared on Victoria’s surf coast in 1977. Inspired musically the lyrical singer-songwriter/folk-inspired style of rock emanating from California in the ’70s and also favoured by Australian ’70s greats like Richard Clapton, Greg Quill’s Country Radio and The Dingoes – whose legendary front man Broderick Smith produced their independently released debut EP in 1979 – they had a commitment to the planet and its people and a passionate romanticism that perhaps rubbed against both the grog sodden debauchery of beer barn rock and the cool cynicism of the burgeoning new wave. Indeed, their global outlook reflected their roots in the alternative coastal surf community, while their political and social engagement seemed with more at home on university campuses. As The Age’s Peter Weiniger described them at the time, ‘They are the Children of the Sun who came of age on November 11th, 1975, and their music carries a message for the ‘Space Invader’ generation….’

While Goanna never rode the coattails of fashion, their spirit and song-craft cut through and, after securing the support spot on a national tour by inspirational West Coast singer-songwriter James Taylor as an unsigned band – unheard of in those days – they signed to Warner Music in 1982.

The group remained uncompromising, and with the production assistance of Australian folkie Trevor Lucas – who left the Australian folk scene of the late ’60s, joined iconic UK group Fairport Convention and married their renowned singer Sandy Denny  – they recorded their classic debut album Spirit of Place.

Even then, Goanna had a notoriously unstable line-up. For the album, Goanna were Shane Howard, his sister Marcia Howard on backing vocals, Rose Bygrave on keyboards, Peter Coughlan on bass guitar, Graham Davidge and Warwick Harwood on guitars, Robbie Ross on drums and Mick ‘The Reverend’ O’Connor (who passed away in earlier this year) on keyboards.

Released in September 1982, the arresting first single “Solid Rock” struck a chord immediately. Its initial impact was most likely musical; its rattling drums, dynamic chording and anthemic chorus were irresistible, and its use of didjeridu – played by Billy Inda of Indigenous rock-reggae outfit No Fixed Address, and Bobby Jabanungga – made it recognisably Australian. But its lyrical concerns would have the greatest lasting impact. Indeed, the record company had been worried it was too confronting; Howard had had a “spiritual awakening” which lit a “fire in (his) belly” about injustices suffered by Australia’s indigenous peoples. The awakening came on a camping trip to Uluru in 1981, when he was moved to reassess his “whole relationship with the land and the landscape and understand that we had come from somewhere else, and we had dis-empowered a whole race of people when we arrived.”

His realisation was profound: “I realised that this country that I grew up in, that I thought was my country, wasn’t.”

“Solid Rock” reached No.1 nationally. It remained in the Top 50 for 26 weeks. Spirit Of Place followed in December. It featured liner notes by previously unrecognised pop pundit, noted Australian historian Professor Manning Clark, who said “Goanna Band are not just entertainers – they are also serious… Their music is about that great human longing. They sing about the spirit of place in Australia.”

Spirit Of Place debuted on the Melbourne charts at #1; the first Australian album to do so since Skyhooks’ 1975 record-breaking blockbuster Living In The Seventies. It reached No. 2 on the Australian Albums Chart within two weeks of its release and remained there for 10 weeks, alternating with Midnight Oil’s 10, 9, 8, 7, 6, 5, 4, 3, 2, 1 for the No. 1 & No. 2 spot. Spirit of Place would go onto achieve 4 x platinum sales, and it has remained in print ever since.

“Razor’s Edge”, the album’s second single; a study of substance abuse, was another bold statement, albeit a more personal one. In April ’83 they got political again, recording and releasing the song “Let The Franklin Flow” to support the campaign against the damming of Tasmania’s Franklin River. It was a huge moment – one that galvanized the Conservation/Green movement in Australia – and Goanna provided the soundtrack. And it was another hit single. Future Greens leader Dr Bob Brown, who headed the Tasmanian Wilderness Society, wrote the singles B-side!

Goanna would disband in 1987 after countless more line-up changes – members who came and went included much-loved Daddy Cool guitarist Ross Hannaford – and a volatile relationship with their record company. Several US tours ultimately failed to put the group on the international stage. A second album, 1985’s underrated Oceania, produced by Little Feat’s Bill Payne after lengthy discussions with Mark Knopfler failed to overcome conflicting schedules, only just cracked the Top 30.

After the release of Oceania, the group toured solidly for nearly a year and then virtually disappeared. Burdened by debt, exhaustion and personal collapse, Goanna splintered. A farewell tour ended, notably, with a performance at the Tamworth Country Music Festival in January 1987, with a line-up that included Indigenous artists Bart Willoughby of No Fixed Address and Bunna Lawrie of Coloured Stone. A disillusioned Howard disappeared into Aboriginal Australia, between Central Australia, the Kimberleys and North Queensland.

Howard would soon embark on a prolific solo career and continue his association with Indigenous artists, most notably as a producer for the likes of The Pigram Brothers, Jimmy Chi, Joe Geia, and as co-producer with Nash Chambers of Archie Roach’s 2006 album Journey. Rose Bygrave would briefly work with legendary Australian blues singer Wendy Saddington before launching a solo career; she also worked with Yothu Yindi and appeared on several tracks on their Tribal Voice album, including the landmark single “Treaty”. Marcia Howard would undertake a solo career of her own early in the new millennium. She was named Artist of the Year at the Port Fairy Folk Festival in 2017.

In 1998, Goanna released a third album Spirits Return, for which Shane, Marcia and Rose were joined by a new line-up including former Country Radio and Dingoes guitarist Kerryn Tolhust. The album reflected the band’s ongoing interest in what it means to be Australian and in the world around us; it included a “Song for East Timor”. Marcia Howard’s “Sorry” addressed the stolen generation, and Goanna performed the song at the first National Sorry Day at Parliament House in Canberra that year. Soon after the group performed two shows for the Melbourne International Arts Festival at the Concert Hall, and then in 2002, a benefit in Geelong for the Balinese victims of the Bali Bombing.

In 2006, Shane performed “Solid Rock” as part of the Countdown Spectacular tour. He was joined by Marcia and Rose at the Melbourne concerts. Whilst it was a nice way of thanking Countdown and its audience for their support, it could not be Goanna’s swansong…

Goanna’s legacy remains and their impact not only endures but grows greater with passing time. Their return for the 40th Anniversary of Spirit of Place could not be more timely, and that spirit – which is not only about this place Australia and our place in it, but Australia’s place in the world – has perhaps never been more vital.

Jimmy Barnes Breaks His Own Chart Record With ‘Soul Deep 30’

Chris Cheney Debuts At #8 On The ARIA Chart With ‘The...