Gillette’s new ad – “The best men can be”, which plays on the razor brand’s long-held motto, “The best a man can get” – is powerful and emotional, a carefully-spun narrative about the role models young boys see in their daily lives. It tackles bullying, sexual harassment, inequality in the workplace, and sexism on screen, by promoting courage, humility, responsibility, and kindness. It says all of these behaviours make up that complicated construct, “masculinity”. And it challenges viewers to question what sort of behaviour defines manliness.

The mutiny against Gillette’s ad reinforces why we need movements like #MeToo and shows how painfully little distance we as a society have covered since it began. In the wake of various high-profile allegations, #MeToo called out unsavoury behaviour that was somehow condoned by society – behaviour that increasingly comes under the umbrella of “toxic masculinity”. Yet Gillette’s ad, which recognises this drive for change and wants to take positive action, has been met by a major backlash.

Angry comments cover a range of issues with the advert: from those who declare they will never buy Gillette again, to the belief that boys need “rough and tumble” to develop healthily, and that society is falling apart because men are simply not “manly” enough anymore. Others claim that only women are hitting “like” and that this is further evidence of feminism sticking its nose where it has no vested interest: men’s toiletries.

On Twitter, these arguments were fuelled by Piers Morgan, who declared he would no longer buy Gillette products, complaining that society should let “boys be boys”. In The Guardian, Gaby Hinsliff drew attention to Morgan’s clearly limited understanding of the message of the advert: the call to reimagine what masculinity can be rather than sticking with outdated notions from the past.

The same obsession with “masculine” stoicism and the “stiff upper lip” makes men more likely to die from cancer and is a factor in why men under 45 have the highest rate of suicide. Presumably those who ask Gillette to leave masculinity alone, don’t want asking for help to be a part of it.

Various commentators have labelled the film “anti-men”, with diatribes aimed at Kim Gehrig, the British director whose work includes the “This Girl Can” campaign, which celebrates women of all shapes and sizes and encourages them to exercise. Gehrig is accused of being a woman directing a film that raises issues about masculinity. One Twitter user compared it to a man making an advert for tampons (which surely has been the case for the majority of female toiletries since television – or even advertising – began).

Others point out that the video uses stereotypes of men. Not only is this not a novelty for representations of women in, say, perfume adverts, but the ad asks viewers to deconstruct how stereotypes are formed and why they persist.

More worrying is that the advert is read in anger as a diatribe against all men, rather than being, as activist Bernice King points out, a call for being “pro-humanity”. It is taken as a direct challenge to masculinity that is intended to “feminise” men, and the anger this has promoted is worrying because the “feminine” behaviour encouraged in the film is being a good role model for young men around you. Stopping a gang of kids beating up another kid is apparently feminine. Like telling a bloke to stop catcalling a woman walking down the street.

Right-wing commentators see the advert’s interplay of boys fighting in a yard alongside news stories about sexual harassment as a campaign against men. It isn’t. It is a recognition that 21st-century masculinity incorporates and sometimes validates both of these behaviours and a lot more; it is complicated and multi-faceted and everyone is individual. But surely we can accept that there are aspects of modern masculinity that aren’t helpful. As comedian Robert Webb made clear in his recent book How Not to be a Boy, toxic masculinity damages everyone, men and women alike.

Critics ignore the explicit message of the advert, which is that gender is culturally constructed, and that we all have a responsibility to shape the future of our society. It isn’t an attack on boys, or an attempt to stop them “being boys”. It’s about letting boys be any kind of boy they want to be. More importantly, it’s about letting them care. 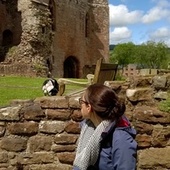