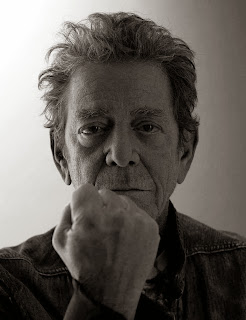 Listening to the first and second Velvets albums in Launceston (on vinyl – natch . . .) with my friend David Woodhall at his house. We were both 16 or 17. We smoked a lot of pot. At the end of the night – after multiple plays of Sister Ray – I said to David “what if we’re already dead and this is what happens next?” We were young but the Velvets were part of our psyche – then and now. We both owed Melbourne’s David N. Pepperell for the tip in the first place.

I’m in Adelaide as a Tasmania representative at the Under 18′s for the Australian Squash Championships. My friend David has asked if I want to see Lou that night. I go to the official opening party in my green blazer and nice pants then race to the venue. We’re in the 10th row. It’s AC/DC as the support. A month before Bon takes over on vocals. They’re wearing pink flares. Come the break and I’m feeling kinda self conscious in my squash party uniform. Did I say this was Adelaide in 1974?
Show time. The band hits with Sweet Jane as Lou wanders out. Amazing show. Two moments. Lou teases a guy near the front. Beckons him to get onstage and dance. Eventually the guy does, Lou turns his back as the bouncers throw the guy out. Show ends. Lou goes to leave. Doors only exist because of walls. Lou would appear to have a choice. He walks straight into the wall. His minders navigate the other option.

I’m managing the Hoodoo Gurus. We’re doing a national tour with Lou. I never get to meet him. But on the morning of our flight from Adelaide to Melbourne we’re boarding the plane and Lou and my eyes meet. He winks. That was it. Ken West promoted the tour. He used to have a framed tour poster on his wall. It read “To Ken – nice try – Lou.”

Lou and I are talking. My attempts at matching it with ‘intellectual’ Lou are falling flat. Questions about Paul Auster and Vaclav Havel are going nowhere. The conversation is spiralling – downwards. I mention the 30th Anniversary Bob Dylan show at Madison Square Garden. Lou become frighteningly nice: “You’ve got to understand, to my right was Booker T, behind me was Duck Dunn, and to the left was Steve Cropper for Christ’s sake . . . I was in heaven. I couldn’t even imagine more fun.”
From this point on Lou and I were bonding – over music. My closing to the story went:
“Just as we hang up Reed tells me it was nice talking. Coming from him it’s a big compliment. Maybe he’s not so bad after all. Ten minutes later he’d dissecting a woman at Triple J with the sensitivity of a demented, pathological surgeon. Oh, that’s right. He IS an arsehole. An extraordinarily talented arsehole.”

Things to listen to:

– All four Velvets albums – Loaded is my favourite followed by the Third Album
– Pretty much any version of ‘Sweet Jane’. The greatest opening riff in rock’n’roll history.
– Live At Max’s and 1969 Live (double album) for the best glimpse of the Velvets live.
– The Quine Tapes – cassette recordings by the guy who would later be Lou’s (inspired) guitar foil.
– New York – for its searing dissection of New York.
– Songs For Drella – Lou and John Cale pay a beautiful tribute to Andy Warhol.
– ‘Coney Island Baby’ – for the lines “I wanna play football for the coach.”
– Rock’n’Roll Animal – Lou’s greatest post-Velvets live album.
– Take No Prisoners – Lou’s second best (and nastiest – and funniest) live album.
– ‘Street Hassle’ – for the line “that bitch will never fuck again” and Bruce Springsteen’s cameo at the end.
– ‘Walk On The Walk Side’, ‘Vicious’, ‘Perfect Day’ – the hits. And they were great hits.
– ‘This Magic Moment’ – by Doc Pomus on Till The Night Comes: A Tribute To Doc Pomus. One of Lou’s heroes and a major inspiration for the Magic & Loss album.
– Berlin – is this or Big Stars Third Album/Sister Lovers the most haunting album ever?
… I could go on.
Share on FacebookShare on TwitterShare on Linkedin