As well as our physical health, the quality of our diet matters for our mental and brain health. Observational studies across countries, cultures and age groups show that better-quality diets – those high in vegetables, fruits, other plant foods (such as nuts and legumes), as well as good-quality proteins (such as fish and lean meat) – are consistently associated with reduced depression.

Importantly, these relationships are independent of one another. Lack of nutritious food seems to be a problem even when junk food intake is low, while junk and processed foods seem to be problematic even in those who also eat vegetables, legumes and other nutrient-dense foods. We’ve documented these relationships in adolescents, adults and older adults.

Diet has an impact early in life

The diet-mental health relationship is evident right at the start of life. A study of more than 20,000 mothers and their children showed the children of mothers who ate an unhealthier diet during pregnancy had a higher level of behaviours linked to later mental disorders.

We also saw the children’s diets during the first years of life were associated with these behaviours. This suggests mothers’ diets during pregnancy and early life are both important in influencing the risk for mental health problems in children as they grow.

This is consistent with what we see in animal experiments. Unhealthy diets fed to pregnant animals results in many changes to the brain and behaviour in offspring. This is very important to understand if we want to think about preventing mental disorders in the first place.

Teasing out the cause from the correlation

It’s important to note that, at this stage, most of the existing data in this field come from observational studies, where it is difficult to tease apart cause and effect. Of course, the possibility that mental ill health promoting a change in diet explains the associations, rather than the other way around, is an important one to consider.

Many studies have investigated this and largely ruled it out as the explanation for the associations we see between diet quality and depression. In fact, we published a study suggesting that a past experience of depression was associated with better diets over time.

But the relatively young field of nutritional psychiatry is still lacking data from intervention studies (where study participants are given an intervention that aims to improve their diet in an attempt to affect their mental health). These sorts of studies are important in determining causality and for changing clinical practice.

Our recent trial was the first intervention study to examine the common question of whether diet will improve depression.

We recruited adults with major depressive disorder and randomly assigned them to receive either social support (which is known to be helpful for people with depression), or support from a clinical dietitian, over a three-month period.

The dietary group received information and assistance to improve the quality of their current diets. The focus was on increasing the consumption of vegetables, fruits, wholegrains, legumes, fish, lean red meats, olive oil and nuts, while reducing their consumption of unhealthy “extra” foods, such as sweets, refined cereals, fried food, fast food, processed meats and sugary drinks.

The results of the study showed that participants in the dietary intervention group had a much greater reduction in their depressive symptoms over the three months, compared to those in the social support group.

These results were not explained by changes in physical activity or body weight, but were closely related to the extent of dietary change. Those who adhered more closely to the dietary program experienced the greatest benefit to their depression symptoms.

While this study now needs to be replicated, it provides preliminary evidence that dietary improvement may be a useful strategy for treating depression.

Depression is a whole-body disorder

It’s important to understand researchers now believe depression is not just a brain disorder, but rather a whole-body disorder, with chronic inflammation being an important risk factor. This inflammation is the result of many environmental stressors common in our lives: poor diet, lack of exercise, smoking, overweight and obesity, lack of sleep, lack of vitamin D, as well as stress.

Many of these factors influence gut microbiota (the bacteria and other microorganisms that live in your bowel, also referred to as your “microbiome”), which in turn influence the immune system and – we believe – mood and behaviour.

In fact, gut microbiota affect more than the immune system. New evidence in this field suggests they are important to almost every aspect of health including our metabolism and body weight, and brain function and health. Each of these factors is relevant to depression risk, reinforcing the idea of depression as a whole-body disorder.

What is the human microbiome?

If we do not consume enough nutrient-dense foods such as fruits, vegetables, fish and lean meats, this can lead to insufficiencies in nutrients, antioxidants and fibre. This has a detrimental impact on our immune system, gut microbiota and other aspects of physical and mental health.

Gut microbiota are particularly reliant on an adequate intake of dietary fibre, while the health of the gut may be compromised by added sugars, fats, emulsifiers and artificial sugars found in processed foods.

A diet high in added fats and refined sugars also has a potent negative impact on brain proteins that we know are important in depression: proteins called neurotrophins. These protect the brain against oxidative stress and promote the growth of new brain cells in our hippocampus (a part of the brain critical for learning and memory, and important to mental health). In older adults we have shown that diet quality is related to the size of the hippocampus.

Now we know diet is important to mental and brain health as well as physical health, we need to make healthy eating the easiest, cheapest and most socially acceptable option for people, no matter where they live. 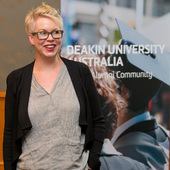 Why Christmas ghost stories have such enduring appeal

Sunday essay: eco-disaster films in the 21st century – helpful or...

The community-led movement creating hope in the time of coronavirus

Here’s what you need to know about the new flu vaccines...

No presents, please: how gift cards initiate children into the world...