Home SCIENCE/TECHNOLOGY ASTRONOMY Evidence of aliens? What to make of research and reporting on ‘Oumuamua,...

As an astrophysicist, probably the most common question I get asked is: “Are we alone in the universe and do aliens exist?”

There is no doubt: people love to think and talk about aliens. Hence, stories about the search for extraterrestrial intelligence get picked up and reported with gusto in the media.

But what really lies at the heart of this complicated and popular topic is evidence – the nature of any evidence of alien life, how we view and respect this evidence, and how this is communicated to the public.

Read more: A super-Earth found in our stellar back yard

Nowhere is this more important than in the coverage of scientific studies of a mystery object – ‘Oumuamua – that was recently discovered passing through our Solar System. For example, two publications in two respected peer-reviewed journals prompted very different reactions.

‘Oumuamua, meaning scout or messenger in Hawaiian, is the name given to the first detected interstellar object to visit our Solar System. On discovery last year, ‘Oumuamua was classified as a comet, but this was later withdrawn when no evidence for cometary activity was detected.

‘Oumuamua was quickly found to have an orbit that does not belong to our Solar System. It has an origin elsewhere in our galaxy, and a trajectory that saw it traverse the inner Solar System over the course of a few months.

It passed close to the Sun and to Earth, and was found to have an unusual geometry, about 200 metres long and some 35 metres wide, rotating every seven hours.

The discovery of ‘Oumuamua generated a lot of attention in the scientific community, and in the media. Given its unusual geometry and its origin outside the Solar System, questions were soon asked as to whether ‘Oumuamua could be a spacecraft.

Observations were made with radio telescopes to search for any direct evidence of transmissions indicating intelligent life, including by a team led by me using an Australian telescope (the Murchison Widefield Array). We listened around FM radio frequencies, on the basis that any intelligent life on ‘Oumuamua may recognise FM frequencies popular on Earth.

No direct evidence of intelligent life was ever found in these searches.

Extensive and impressive observations with a range of telescopes, including the Hubble Space Telescope, were made to accurately determine ‘Oumuamua’s trajectory. Results of the study, by a team of astronomers led by the European Space Agency’s Marco Micheli, were published in Nature in June.

These very careful observations showed that ‘Oumuamua accelerated as it left the Solar System, revealing the existence of “non-gravitational forces”. This means that the trajectory of the object could not be explained just by the gravity of the Sun and other major objects in our Solar System.

A range of possible explanations for the acceleration exist. One is that heated gas escaping from ‘Oumuamua (outgassing) could produce a force that caused the observed acceleration. This is commonly seen in normal comets.

But ‘Oumuamua still shows no evidence for cometary activity. Micheli’s team ran through six possible explanations and concluded that outgassing is the most likely option, even though there is no direct evidence that this is the case.

They showed that the acceleration of ‘Oumuamua is unusual, but within the bounds of what has been seen previously for Solar System comets.

One of the explanations discounted by the study team is that ‘Oumuamua was accelerated by radiation pressure from our Sun. Radiation from the Sun can push objects away from it.

But they concluded that this explanation is not preferred, because it means that the density of ‘Oumuamua would have to be very low. An object needs have a large surface area and low mass (low density) to be accelerated by radiation pressure.

Could it be aliens?

Details of the study have just been published in November’s The Astrophysical Journal Letters, but were available online earlier.

The authors chose to assume solar radiation pressure to be the cause of the acceleration, and then determined the properties of ‘Oumuamua required to make this work. They require an object with thickness less than 1mm, an areal mass density of 1 to 2 grams per square centimetre, and a large area.

It is unlikely that nature would produce such an extreme geometry. The authors quickly mention this, before moving to a discussion that, under the assumption that solar radiation is the cause for the acceleration, ‘Oumuamua is artificial – that means the product of an alien civilisation.

The properties the authors derive under their assumptions are similar to those of solar sails being designed and built by humans as a possible way to travel interstellar distances.

Bialy and Loeb spend half of their article discussion section on the idea that ‘Oumuamua could be a defunct or active solar sail belonging to an alien civilisation.

The nature and communication of evidence

Bialy and Loeb did not issue a press release about their study, but the media picked up the paper once it was accepted and available online, prior to this week’s journal publication.

(This is something that happened to me in 2012, leading to my published non-detection of aliens being run on the front page of the BBC news website.)

Bialy and Loeb’s publication attracted headlines such as this, for example: “Harvard astronomers claim Oumuamua is ALIEN PROBE – ‘Nothing like we’ve ever seen!’”. Most other reporting was more balanced.

This is pretty normal. A lot of the media jump to aliens in the reporting of space and astronomy, even when the original reported studies have never mentioned aliens. Recent reporting of Fast Radio Bursts (FRBs) is an example.

What surprised me was the reaction of some of my colleagues to Bialy and Loeb’s paper. On social media, there have been some pretty personal attacks by scientists – on Loeb in particular – for being in the media for this work.

Both new studies lay out their assumptions, cite substantial evidence, and undertake rigorous calculations. Both were accepted by top-quality journals after independent peer review.

Both finish with bottom lines that the studies of ‘Oumuamua are inconclusive and we will need to examine more such objects that come through the Solar System in the future.

Both sets of authors also come up with different perspectives and motivate different questions. But Loeb has ended up in the media, talking about his paper, and is being panned by some colleagues for it.

Since the pre-journal paper was picked up he told me he has been swamped by media interest.

I use the discussions with the media as a platform for highlighting the standard scientific methodology: an anomaly is observed in data, the standard explanation fails to explain it, and so an alternative interpretation is proposed.

I encourage anyone with a better explanation to write a paper about it and publish it. Wrong interpretations can be ruled out when more data will be released on ‘Oumuamua or other members of its population in the future.

As for the negative reactions he has received, he referred to an article he recently published where he paraphrased another scientist known for his once-controversial theories.

As Galileo reasoned after looking through his telescope, “in the sciences, the authority of a thousand is not worth as much as the humble reasoning of a single individual”.

Given my work on observations of ‘Oumuamua, a few journalists have contacted me for comment.

These have been great opportunities to discuss in depth with journalists the nature of evidence, the difference between something being consistent with observations and direct evidence for a conclusion, and the need for evidence to be commensurate with the impact of a claim.

If aliens are claimed, direct and robust evidence is required – not a conclusion based on a few observations that are difficult to explain, plus a bunch of assumptions.

But no scientist has claimed ‘Oumuamua is alien in this discussion – they have just raised questions and explored answers.

There is no point in shying away from a proper discussion on the search for extraterrestrial intelligence, or in being personally critical of colleagues.

Scientists should take every opportunity to engage with the public and the media on the topic, given the public’s interest and the media’s willingness to report.

It is interesting, fun, and scientific, and a great opportunity to discuss the scientific method and science in an engaging manner. The media reporting of ‘Oumuamua shows that (aside from a few headlines), the content of reports is generally pretty good and responsible.

Whatever ‘Oumuamua is (almost certainly not made by aliens, in my view), it is a fascinating object and presents lots of interesting scientific questions that will trigger further studies and observations.

We will never see ‘Oumuamua again, and we may never know exactly what it is. But seeing ‘Oumuamua in the news is likely to inspire some kids to take up a career in science. 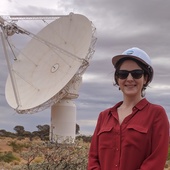 Is there a place for dogs in public spaces, or must...

David Malouf’s An Open Book is poetry to sit with

Electronic games: how much is too much for kids?

The Cashless Debit Card causes social and economic harm – so...

Mass slaughter of wedge-tailed eagles could have Australia-wide consequences

There’s a yawning gap in the plan to keep older Australians...