There is a long history of damaging stereotypes of Arab and Muslim men on screen. Because of this, audiences from culturally diverse migrant backgrounds understandably crave more positive representations of their ethnic and cultural communities.

In this loosely autobiographical coming-of-age story, stand-up comic Ramy Youssef isn’t trying to promote a positive ideal of Egyptian American-Muslims to mainstream audiences. Instead, he crafts a more complex view.

Ramy is proud to be Muslim but struggles with the pressure to conform to a template of Arab Muslim masculinity that others around him seemed to have already worked out.

He works at a failing start-up with vague goals to “make a difference.” His best friends, a surgeon and restaurant owner, are already married with children.

His insecurities about “failing” as an Arab Muslim man hover in every interaction.

In a scene that challenges the myth of a biological connection between ethnicity and male violence, Ramy gets caught up in a fight on the street and jumps on top of his car to escape copping any blows.

In his dating expeditions, we see Ramy unable to be the partner the women deserve. He gives himself a pass for premarital sex with non-Muslim partners but holds the young Muslim women in his life to higher standards. In attempts to “settle down” he goes on a blind date with a Muslim woman and comes up short when asked about his life goals.

Much has been written about the stereotype of angry young Arab Muslim men.

The anger is a response to a range of issues.

He is navigating casual racism; institutional racial profiling; a media that grossly misrepresents his faith and parents’ homeland.

In his own community, he is trying to live up to parental expectations: a stable job, a house, a family – pressures explored in Ali’s Wedding.

In Arab Australian and Muslim men, some academics have called the masculinity that emerges from these interwoven pressures “protest masculinity”: displayed through physical dominance, specific stylistic choices, and sporting interests.

Australian films Cedar Boys and The Combination have depicted this Arab Australian protest masculinity, where young men release the pressure through physical violence.

In a post-Cronulla Riots age, telling these stories makes sense.

Those films show some of the difficulties of young adulthood for some boys whose agency is stripped of them, international crises are pinned on them, and the intensity of community pressure looms large.

But the way young people respond to these pressures are not all the same.

In my research with young men from migrant Arab-Australian families who have creative ambitions, I explored what it can mean to feel disconnected from the usual stereotypes of Arab Muslim young men living in Australia.

They told me they felt pride in their cultural backgrounds, but they were worried about their future. They were uncertain about their sense of belonging among peers who had different interests.

Some were desperate to escape what they saw as suffocating local working class ideas about masculinity and ethnicity. But in prestigious fine arts courses they found themselves out of place, branded too “ethnic” to fit in.

Some thought the macho sexism displayed by their Arab-Australian school peers was a product of their ethnicity or culture. And while there are specific kinds of gender issues in Arab Muslim communities, when they reached university, socialising outside their neighbourhood, these young men learned sexism and misogyny features across all social, class, and cultural backgrounds.

These conversations about contemporary millennial masculinities, ethnicity and identity are at the core of Ramy.

Ramy performs neither protest masculinity, nor the role of ambitious migrant son. He isn’t a hero. And the show doesn’t attempt to make him one.

Not all masculinities can be stereotyped

We see a similar story in the new Australian film Slam.

Politically outspoken Ameena (Danielle Horvat) goes missing after a night performing slam poetry. Her brother Tarek Nasser (Adam Bakri) comforts himself by believing that she ran away, rather than confront the possibility of racially and gender-motivated violence against her – a considerable fear for young Arab and Muslim women in Australia.

Tarek denies the reality of racism in contemporary Australia. For survival, he focused on passing as non-Muslim and “non-Leb”, and on getting out of Bankstown – a socio-economically disadvantaged area home to a large population of Arabs and Muslims.

Now living comfortably in a middle class inner Sydney suburb, he runs a cafe with his Anglo-Australian wife. He goes by the name Ricky. He speaks in his native Arabic only with his mother.

He distances himself from the Arab Muslim community he grew up in, but is awkward in the non-Arab community he thought he had seamlessly settled into.

Like Ramy, he is not a stereotypical working class tough guy. He appears out of place alongside young men from his childhood neighbourhood, as we see when he goes to the boxing gym to find Ameena’s friends. He is similarly uneasy among his wealthy in-laws: equal parts distant and suspicious.

Like the participants in my research, Tarek has to reckon with the tensions of community and individual aspirations to “make it” in broader Australian society.

Both Ramy and Slam show representations of masculinity and how this relates to ethnicity, culture and the casual racism that confront some young Arab and Muslim men in everyday settings.

They also reveal the ways these young men are blind to the gender struggles of the women in their lives.

Rather than pin down these characters in absolutist ways – choosing to fulfil macho and pious patriarchal expectations or opting out altogether – Ramy and Tarek try to draw on positive elements of their upbringing and honestly negotiate the tensions in their identities.

Tarek and Ramy’s supposed “failures” as young men are refreshing to watch.

It may be tempting to dismiss Tarek and Ramy for not being positive role models. But many who struggle to be the perfect, upwardly mobile migrant child will be able to relate to their experiences and inner turmoil.

These men are are flawed, nuanced and contradictory: a kind of masculinity that is necessary to see on screen. Especially for Arab Muslim young men whose stories are still rarely told in nuanced ways. 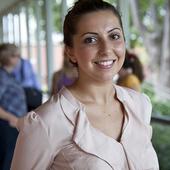