2552 POSTS 23 COMMENTS
https://www.tagg.com.au
Mick created TAGG - The Alternative Gig Guide in 1979 with Helmut Katterl, the world's first real Street Magazine. He had been involved with his fathers publishing business, Toorak Times and associated publications since 1972.  Mick was also involved in Melbourne's music scene for a number of years opening venues, discovering and managing bands and providing information and support for the industry. Mick has also created a number of local festivals and is involved in not for profit and supporting local charities.

YOU DON’T KNOW WHAT THE PROBLEM IS?

Mick Pacholli - December 6, 2005 12:45 pm
0
You have got to be kidding! Apparently the latest problem at school is the dysfunctional parent. It does not surprise me at all when you consider the fact that the aberrational teachers of the Eighties and Nineties promoted illiteracy as a social evener.

Nowadays we have a generation of early parents whose social mores are far less than adequate and are now dragging their children through a mire of ignorance.

What cuts me the most is that it is the people I supported that created this philosophy of inadequacy, tempered by the burning fires of socialist feminism. We allowed our future to be under prepared and I reckon while the counter culture was going to sleep those that needed peons acted.
Read more

WILKIE’S POKIE REFORMS SET TO FAIL
The President of ClubsAustralia today said the Tasmanian Independent MP Andrew Wilkie’s $3 billion poker machine reforms have been designed to deter recreational gamblers and would not stop problem gamblers from betting.
Addressing the National Press Club, itself a venue that will be subject to Wilkie’s mandatory pre-commitment technology, Peter Newell said the anti-gambling lobby was well aware that responsible gamblers will refuse to register for a license to gamble.
“The Member for Denison is on the record as saying he’d like to see poker machines disappear altogether. 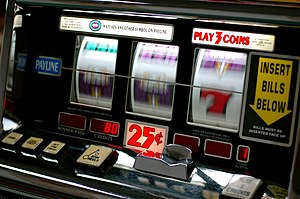 Image via Wikipedia
“But he admits that his “restrictions” – his word – are a good step along the way to this ultimate extremist and prohibitionist goal,” he said.
Peter Newell accused Wilkie and his followers of ignoring the advice of some of Australia’s leading gambling experts and welfare groups who have concluded that mandatory pre-commitment will not help problem gamblers stop betting.
“The Australian Government has seen plenty of evidence only in the last couple of months that this is a flawed proposal as far as helping problem gamblers is concerned.
“Australia’s leading academic on problem gambling, Professor Alex Blaszczynski, advised a Parliamentary Committee chaired by the Member for Denison himself that pre-commitment is unlikely to have a significant impact on the majority of problem gamblers, and may even exacerbate problem gambling.
“Common sense tells you he’s right, because problem gamblers are unlikely to set affordable limits and are likely to set high limits or none at all.”
“And with regard to the absence of cost-benefit analysis, isn’t this an amazing way to make public policy on the run – announce a wide-ranging measure impacting on millions of people, and only after that perhaps look to see what it might cost,” Peter Newell said.
Key facts:
·         Mandatory pre-commitment has never been trialled in Australia
·         There are 5,700 clubs and pubs across Australia and employing 268,000 people directly
·         There are 10.5 million club memberships nationally
·         5 million people play a poker machine each year
·         There are 95,000 problem gamblers in Australia (2% of poker machine players)
·         The rate of problem gambling has fallen in every state over the past decade. In NSW, QLD and VIC, the rate has fallen by an average of 44%
·         Andrew Wilkie has admitted gaming revenue will fall by up to 40% or $4.8b annually
·         State and Territory governments will lose over $1 billion in gaming tax annually as a result of mandatory pre-commitment technology
·         The Productivity Commission found that poker machines make a net positive social contribution of between $768 million and $5.5 billion a year.

Explainer: what is the electricity transmission system, and why does it...