What such writers are navigating is the risk of cultural appropriation: the often offensive taking of another’s culture. It is particularly problematic when the appropriator is in a dominant or colonising relationship with a culture’s custodians. Australian literature has a long history of appropriating and misrepresenting Aboriginal culture.

Take anthropologist A.P. Elkin and his associate W.E. Harney. These white men collaborated in the 1940s on a book translating Aboriginal songlines into anglophone ballads.

In “Our Dreaming”, a dedicatory poem to the resulting collection Songs of the Songmen, the pair open with a self-aggrandising appropriation. This opening text emphasises their ownership of works that they are merely translating.

Together now we chant the ‘old time’ lays,
Calling to mind camp-fires of bygone days.
We hear the ritual shouts, the stamping feet,
The droning didgeridoos, the waddies’ beat.

An unpublished 1943 revision by Harney, altered by Elkin, even more noticeably emphasises the two authors’ claim on these songlines. The poem is titled “To You My Friend” and the first line reads, “To you my friend I dedicate these lays,” as though Harney is bestowing this culture on Elkin directly.

The pair claim to write:

not of their huts, the bones, the dirt,
Nor the strange far look in a native’s eyes,
As he looks to his country ‘ere he dies.

Rather than this vision of the apparently doomed “native”, Songs of the Songmen would purport to extol the romantic figure of the noble savage. The poem continues:

Tis not of these we muse today:
For the ‘Dreaming’ comes, and we drift away
Into myth and legend where we’ve caught
The simple grandeur of their thought.

The pair’s poetry claims in this way to be able to salvage and recapture the “Dreaming”, represented as no longer accessible to Aboriginal people themselves.

This example shows how appropriation, far from innocent, is bound up with attitudes such as the idea of a “doomed race”. It can also be connected to such projects as assimilation and child removal; Elkin advocated both.

The most famous literary movement in Australia to be engaged in appropriation formed in the 1930s. They were the Jindyworobak group, their founder Rex Ingamells drawing the word from his friend James Devaney’s book The Vanished Tribes, which included a Woiwurung word list.

Jindyworobak means “to annex” or “to join” in Woiwurung. The practices of its writers were, however, more annexation of Aboriginal culture than any inclusive joining together.

Another writer who found Harney to be a useful source was Xavier Herbert. Herbert drew on Harney’s notes on the Yanyuwa kinship system (Harney spelled the name Anula) and turned skin names into character names in his 1976 epic Poor Fellow My Country. He had Harney’s permission but not that of the Yanyuwa themselves. Herbert’s novel arguably offers a distorted view of Aboriginal kinship.

Some of Les Murray’s verse can be read as inheriting from Jindyworobak and its legacy of appropriation – notably his 1977 Buladelah-Taree Holiday Song Cycle, which presents a non-Indigenous family holiday as sacred to the equivalent of an Indigenous song cycle. Murray’s poetry is often innovative, but its progenitor is also famous for positing a near equivalence between non-Indigenous and Indigenous belonging

Murray has lent his name and ability to publications such as Quadrant, whose editors famously denied the existence of a Stolen Generation. Even where the poetry might be compelling for some, Murray’s reputation is nonetheless associated with Quadrant’s dismissal of Aboriginal perspectives on history and self-representation.

This history of appropriation is dispossession, using another’s culture for gain and without their permission. Yet some have been calling recently for Australian literature to return to and revive these legacies.

Critic and poet R.D. Wood has rhetorically asked, in the context of a discussion about the translation of song-cycles, “what might a Jindyworobak project for the 21st century look like?”. Such a project augurs poorly as a means of engagement for non-Indigenous writers.

In Kayang and Me, Kim Scott strongly objects to Mateer’s poetic use of Nyungar language at a reading from one of Mateer’s poems when they were both performing at an event in Canada. Scott speaks of the distress he felt at hearing a language that is only just being reconstituted and reclaimed by Nyungar people themselves, being spoken by, as he says, a white South African. There are important issues in this. First, Scott as a Nyungar is in a position to critique what he sees as an inappropriate usage of a language that has been placed under massive pressure by the machinery of colonisation.

On the other hand, his isolating Mateer’s South African origins does not take into consideration that Mateer is, both poetically and in terms of self-identity, as much a part of ‘Western Australia’ as of his birth land.

Mateer in his book Loanwords utilises borrowings and usages from a number of languages in order to reconstitute their original implications, while also building in the agency of new meaning in the language in which they are being deployed. This transnationality is the main drive of his work. Mateer meant no disrespect, I believe, but the issues are at the core of contemporary poetics. What is and is not available to the poet in creating a poetic language that carries its own intactness and its own implications for reading?

As Kinsella also argues, this is exactly where we need to be careful. While such transnational borrowings can enrich the English they emerge in, what is the effect on the speakers of the original language who are still recovering their culture in the face of colonisation?

Kim Scott has said in relation to Mateer’s work:

… there are very few forums for Noongar people to come to terms with the ideas of their ancestors … so it can feel doubly wrong when recent arrivals use those representations for their own purposes.

Others, more globally, have taken umbrage with critiques of appropriation. Kwame Anthony Appiah, for instance, has recently suggested that the idea of cultural ownership is vested in the commodity and not useful for thinking about cultural borrowing. Yet, he does not consider the numerous ways in which Indigenous culture is non-transferable – because it is a form of property grounded in kinship and Country.

Some poets who engage ethically with Aboriginal ways of writing and using language include Phillip Hall and Stuart Cooke. Hall engages with the same Gulf of Carpentaria Indigenous people, the Yanyuwa, from whom Herbert stole, but he does it through a reciprocal and ethical engagement. Hall has permission to write about these relationships. Cooke’s work includes translations of song cycles from the West Kimberley, for instance one written with the permission of George Dyunjgayan.

Non-Indigenous writers, if they wish to engage ethically with Indigenous culture, must learn to respect it as a form of property grounded in kinship and Country.

Michael Griffiths is the author of The Distribution of Settlement: Appropriation and Refusal in Australian Literature and Culture (UWAP). 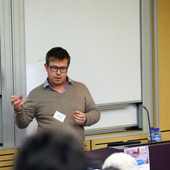 How should I clean my cloth mask?

VR technology gives new meaning to ‘holidaying at home’. But is...

There’s a strong link between anxiety and depression, and sleep problems,...