This is Anna. She grew up in the Western suburbs of Melbourne where her first job was delivering loaves of dad’s bread to all the locals who used to high-five her but as she is Asian she wasn’t nice to them until they had paid.
Everyone in Anna’s family werked and twerked the hospo scene running the original Bahn Mi Empire of the 90’s, back before that dish was kewl. While she loved food and was addicted to that lil white gluten devil, she also loved to draw, and suprised her family when she announced she was going to study architecture at RMIT instead of continuing the business. She went to RMIT and majored in the drawing of buildings and minored in micro-nations because Anna literally has way too much ADD to concentrate on just one thing.
Hang on, what the hell is a micro-nation? Literally a tiny independent country that has it’s own rules and sh*t. And like, hardly any people. There are heaps around – Australia in particular – from Principality of Sealand to Nova Roma to Principality of Hutt River *
Yeah but like.. what.. actually, I don’t get it? People define territory and start their own nation – independent sovereign states with their own rules.
Riiiight well what’s the weirdest one you remember? There was one where the rulers lived on a tiny, tiny island off Australia and they invited people to a knighting ceremony. About ten people flew over in helicopters to watch the king and kween knight their own son and then they all flew back again that same day because there wasn’t any room for them to stay.
I am so bewildered, I can’t talk about this anymore. Yeah kewl.
Anyhoo, so after years of random study, architecture and then slaving for da man, she decided life was just too easy so she opened her own Vietnamese restaurant in Yarraville called Friend or Pho (which she architected). Why back to kitchen? Cos she: 1) couldn’t shake that lil white gluten devil; 2) is a feeder. ‘I’m Viet so feeding is in the soul’ 3) she is a proper WESTY through and through and wanted back into the Wuburbs.
Favourite part about restaurant life? All the old high-fivers of the 90’s come past and say hi to me still –  they are happy that I came back to the neighbourhood.

Violent Femmes @Arts Centre (16 Mar) – Ms Violet Beauregarde has her pick of the snozzberries.
Melbourne Design Week @ NGV (16 – 26 Mar) – the one week a year that Melburnians are invited to wear something other than black.
Top Designs 2017 @ Melbourne Museum (18 Mar – 16 July) – top not bottom. Chillout Festival was last weekend guys.
The Melbourne Tomato Festival @ Northcote (19th March) – Guy Grossi squeezes his fave fruits all over the trams.
Herb and Chill Festival @ Wandin (18-19 Mar) – Herb rubs chilli all over Wandin.
Ararat Jailhouse Rock Festival @ Ararat (17-19 March) – to rock and/or roll. That is question.
Castlemaine State Festival @ Castlemaine (17-26 March) – the new Northcote puts on a party that will raise property prices and make Maldon the new, new Northote. #icalledit
Sharks and Silent Disco @ Melb Aquarium (18 Mar) – there will literally be murder on the dancefloor.
Melbourne Art Book Fair @ NGV International (16-19 Mar) – I went to this last year and I have never felt less like a hipster in my life.
Snag and Beer Festival @ Heathcote (17 March) – I’ll just take the sausage thanks xx
Middle Eastern Food Truck Festival @ Food Truck Park (17 Mar) – I’ll ~definitely~ take the sausage.
Arnie’s Stongman and Strongwoman Championships @ MCEC (17 – 19 Mar) – because EVERYONE can be strong. And run for Governator. And sleep with their house cleaner. 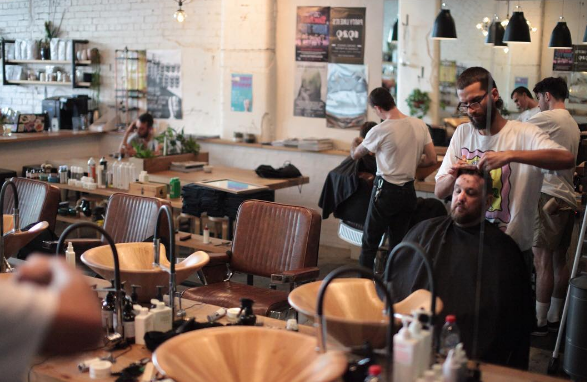 Gang, I cheated this week. I’m disgusting, and I hate myself. I’m practically Julia Roberts in Pretty Woman minus the necklace (should have been pearl).

Hear me out, people. I cheated on my hair dresser. Since moving $outh $ide I’ve made a lot of changed. New coffee joint, new supermarket (aldi4lyf), new train station… and it doesn’t have the new, quick myki stalls either fml.

But there’s one part of my life that’s still North. My hair dresser. She’s 100% bae, and I’d recommend her to anyone and everyone (Eros Hair Lounge in North Melb x). But when I have a day off, or need to nip out for a quick hair cut I can’t because North Melbourne is sahhhhhh farrrrrr awayyyyyy. I might as well go to Shit-ney for a hair cut. Ugh..

Louisa by name, Bae-isa by profession. She was the KWEEN of my hair. She werks at The Bearded Man on Chaps, and it’s a ripper of a place. Fab tunes, fab decor, and on weekdays they have an in house barista.. excuse me but are we in NYC?? #GLOBALCITY

I’d 100% recommend her for all you boiz out thurr that need to gets yo hurr did.

CAN YOU GUESS WHERE THIS IS?
Note from Dan Austin, our resident sketchie:
Dear Sprank, Here is a new picture. This building is a personal favourite.. includes a stunning City Mart and dusty empty floors. Hard to see, but it’s a gem of a building. Nobody will get this. But as Whitney once said ‘Ít’s not right, but its OK, I’m gonna make it anyway’. Many things wrong with this picture but remember I did it for Australia.

LAST WEEKS SKETCH – was the old music-shop-turned-miso-place in KEW JUNCTION and the KWEEN who guessed it was Mimi West. I will be sprinking her as soon as she recovers from her weekend at Golden Plains.