Maddawgs of Melbourne
This bae mother of two is Xanthe. She has a wonderful British accent and is the kind of person who calls agua con gas, disco water. She was a chef for many years, and made some top notch grub in her lil restaurant in Bath. One night this KWEEN got hella crunk with a friend and admitted that being a food writer would be her dream job. The following day Xanthe’s hungover bud called to bully her into ringing a newspaper and get all #PitchB!tch on them. Being equally Hungdog Millionaire, she found it easiest not to argue. Literally five minutes later she had her own column, where she would make and review recipes sent in by readers.

Bye bye kitchen and HELLOOOOOOOO LYF of a journo. That was 18 years ago. Since then KWEEN X has gallivanted around the world dining and reviewing some of the greatest restaurants, chilled with top chefs, sank sauv blanc with somms, and talked tech and taste with other food nerds. Four years ago she got THE call from The World’s 50 Best Restaurants awards peeps asking her if she wanted to be a judge. She’s now an academy chair so she’s a total bawsss.

So, you’re a W50B judge – do you think you’re kewl?
I’m really really not kewl. I think nerdiness is the new kewl, and I am not even nerdy enough to be that kind of kewl so.. no. I am not kewl.
What makes a restaurant World’s 50 Best worthy?
There are one thousand voters with one thousand different views. I’m tempted to say service, but in terms of food, I say it’s making produce taste like itself on acid. Like it’s own flavour just utterly pumped up.
How does the voting werk and who did you vote for this year?
We get 10 votes each and there is not a chance I will tell you who I voted for.
Boo the Sprinks and I are good at keeping secrets. I SWEAR. Ok – worst food?
Durian. You know that fruit? They’re obsessed with it in Malaysia. It smells of vomit. The smell just hits you. I imagine its like chewing Genghis Khan’s jock strap or sticking your face in Chewbacca’s arm pit. I could never.
Best meal ever?
Outside of Australia it would be Dan Barber from Blue Hill at Stone Barns in New York.
OK, speaking of Australia what have you loved since you’ve been here?
Fingerlimes. They’re amazing! Everything is nicer with a little bit of fingerlime, you just add it to a dish and the beads are a surprising burst of flavour. Oh and blue scampi caviar. I thought it must have been dyed when I first saw it.
So Mexican, dude food, Korean.. lets talk food trends. How does a food trend happen?
It starts as a pop up in a small hipster area which generates a bit of nerdy food press. Then it pops up again in an area a little more mainstream and you’ll read about somewhere like The Guardian online. Next, it’s in a slick restaurant (and see it in, say, Gourmet Traveller), then it moves out and the same food trend starts happening out in the suburbs. Supermarkets begin stocking the ingredients and you’ll see it as recipes in the press. Then it will appear as ready made meals – this is when it is suddenly uncool. The kiss of death is when it’s turned into crisp flavours. Then you know that none of the hipsters will want it again until 20years later when they’ll ironically put this flavoured chip in a sandwich.
What’s the next one?
African. I think in about 5 years.

Rip Curl Pro @ Bells Beach (12 – 24 April) – a competition for Just Jeans staff to prove once and for all who is the biggest and best ripper in the company.
Brown Brothers Easter Festival @ Wangaratta (15-16 Apr) – What does the Easter Bunny get for making a basket? Two points, just like anyone else.
Boogie @ Tallarook (14- 16 April) – I’m sick of being blamed for this.
Golden Horseshoes Festival @ Beechworth (14-17 Apr) – the piebald filly kicked off her golden stilettos, undid her mane braid and fell back onto the couch, exhausted.
Nitro Circus @ Horsham (16 April) – Elly the elephant packs her trunk and runs away to join a different circus.
Balmoral Easter Market @ Balmoral (15 April) – Cousin Balki has a breakdown when he realises that the Greek eggs from the market are real eggs, painted. Not chocolate. Larry has issues at work with a colleague he used to like.
Dunkeld Polo @ Dunkeld (15 April) – RALPH’S BACK BABY
Tastes of the Grape @ Grampians (15 April) – tastes like crying grapes. Or melted sultanas. Or TASH SALTANA in a spa. Oh what the hell that is gross.
Tarra Festival @ Gippo (13-18 April) – get yo cards read, gurllll.
Easter Fun Run @ Phillip Island (15-16 April) – penguins chase chickens around the PI Grand Prix track. The losers are thrown to the foxes. That’s life folks.
Kids Day Out @ MCEC (14 April) – I am a SINK so I don’t even know what kids do when they are in, let alone out.
A March to Art: Identity @ SPACE (until 25 April) – who are we? Why are we here? What does it mean? A) aliens; b) aliens; c) aliens. Next?
Love: Art of Emotion @ NGV (until, June 18) – artistic, caring, emotionally expressive. All the things my ex-boyfriend wasn’t.
Chocolate Food Truck Festival @ Food Truck Park (14 Apr) – dark, rich, and pleases me. Boyfriend material.
Falls Creek Easter Festival @ Falls (14 – 16 April) – what do you get when you pour hot water down a rabbit hole? A hot cross bunny.
Hazeldene’s Bendigo Easter Festival @ Bendigo (14 – 18 April) – lots of easter jokes. I’m egg-sausted
National Trust Heritage Festival (18 April – 21 May) – big city lawyer William Banks (Nicholas Cage) returns to his family home after a case ends his career. He reconnects with his past and realises he should never have left the farm.
Phillip Island V8 Supercars @ PI (15 – 17 April) – I don’t have a long enough beard to go to this.
Tarra Festival 2017 @ Yarram (13 – 18 April) – you don’t have to go back in time to attend this one.
Stawell Gift 2017 @ Stawell (15 – 17 April) – don’t stall

Customers don’t get a menu, because Aaron doesn’t know what he is cooking til he shows up to werk and looks in the fridge to see what is there #UNILYF. He offers 8 courses – you can opt for more along the way – but be sure to look around you because the other tables (weirdly erryone was under 45?) are being served different dishes from you. Like WTF is this a restaurant in The Faraway Tree? Anyway, there isn’t enough praise I can dish out about what happened to my pie-hole, I discredit his creative genius with my limited vocab and short attention span, so I’m just going to tell you the ingredients in some of the dishes: 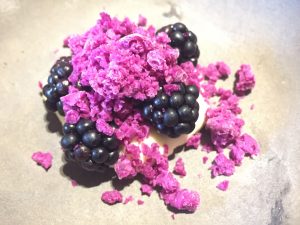 Garlic-potato-spaghetti cooked in chicken fat, adorned with yolk, leek ash and purple corn flowers.
Pine needle yoghurt, freeze dried plums and flowering-gum ice-cream.
2-day fermented pork belly, chargrilled carrot with emu bush salt.
Crumbled blue vein covered with Meredith goat-cheese granita, mint and served in a freaking shell and eaten like ice-cream.
One course alone was those 8 lil dishes above (one was baby cos with oyster squirted inside and it was maybes my favourite dish but no that’s like choosing your favourite cat YOU CANNAE).
King George whiting-mustard leaf, tamarind and salmon roe in a sea of roasted tomato juice water.
Smoked celeriac with cured yolk swimming in wallaby tail broth which I can still taste when I think about it meow. PS I don’t know what celeriac is. 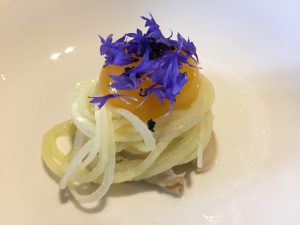 I also went off-grid and got paired NON-alcoholic wines with my dishes. They were so good that I interrupted the people beside me to request they try them all with me. The dranks were crazy colours (bright orange, purple, baby pink), that would bubble or even pop, and the flavours were insane – half of them should have been a meal in their own right, like a cold soup thing. ‘Do you mean gazpacho?’ Shut up. 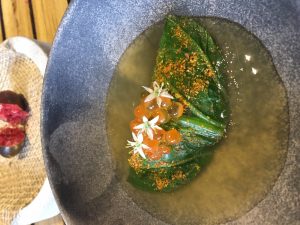 In addition to the incred delights that await you at IGNI aka heaven, ole mate Turner’s staff are bae and kewl AF, you kinda feel like you’ve met them all before and would trust them with your spare key. The 50pax dining room has dem posh homely feels, and the chunes dat pump but not overpoweringly, are A flippin plus. Hanging out in a back alley in Geelong has never been so mind blowing.
Share on FacebookShare on TwitterShare on Linkedin 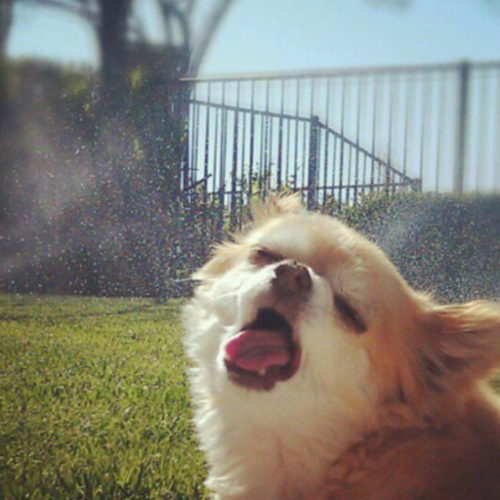